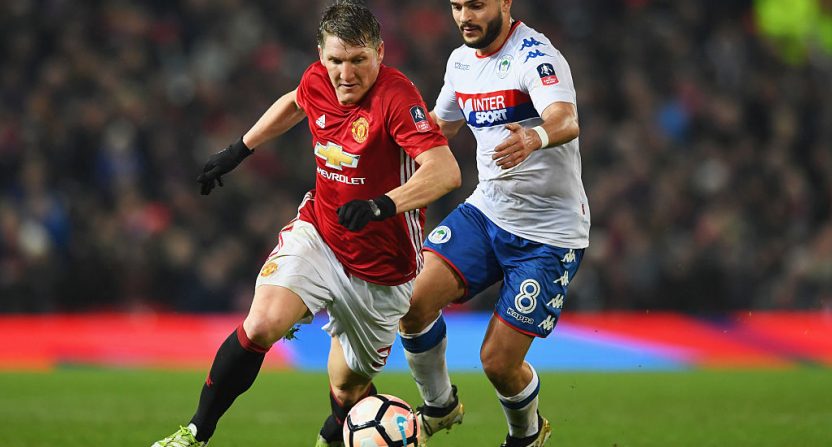 For only the second time in history, a reigning World Cup champion is joining MLS. That would be Bastian Schweinsteiger, who went from Bayern Munich to Manchester United with great fanfare in July 2015, but fell out of favor after Jose Mourinho took over the next May. Now, according to Rich Campbell of The Chicago Tribune, Schweinsteiger is set to join the Chicago Fire on a one-year $4.5 million contract, and he could suit up for them as early as next week:

The Fire on Monday acquired Schweinsteiger from Manchester United, finalizing a move that injects credibility and international star power into a rebuilding club that has finished at the bottom of the standings the last two seasons.

Schweinsteiger, 32, comes to Chicago as only the second reigning World Cup champion to move to MLS. He could join coach Veljko Paunovic’s team by the middle of next week, depending on his P1 visa application and a physical.

“We’re adding someone who has won at every level, including the very highest levels, and has done so in a way that is consistent with our values,” Fire general manager Nelson Rodriguez said. “We as a club will now be forced to hold ourselves to a higher standard, an accountability level. Previously, I think we could satisfy ourselves with what is known domestically. Now we need to rise to a standard that is set more internationally.”

The big question is how effective Schweinsteiger will be, though. While he was a key figure for the German national team for over a decade, participating in three World Cup tournaments and four European championship tournaments, and while his Manchester United move was hotly anticipated, he’s been a marginal presence there lately. He made his first Manchester United start in over a year in the FA Cup back in January (notching a goal and an assist in a 4-0 win over Wigan), and he’s only appeared in one match since, as a substitute to boot.

Moreover, many of the World Cup winners who have come to MLS (this list, from 2014, had seven players who met that criteria) haven’t been particularly impressive. The only previous reigning World Cup champion to head to MLS is Brazil’s Branco, who joined the New York/New Jersey MetroStars in 1997 and put up a terrible career stat line of 11 appearances, one goal, two assists, and three red cards. Other World Cup winners to flop in MLS include Denilson, Kleberson and Lothar Matthaus.

Of course, MLS is far different now than it was in the league’s early days, and some later additions like Thierry Henry and Alessandro Nesta did much better than early failures like Branco and Matthaus. Schweinsteiger could potentially do so as well. If he can show off some of the skill he did during his time with Bayern Munich and the German national team (he retired from international football in 2016), and if he still has some speed left in the tank, he might be a valuable addition.

While Schweinsteiger is only 32, though, he does have a lot of mileage on him. He made his first-team debut for Bayern Munich at just 18, and played his first international senior game for Germany at 20. The success of both of those sides led to a ton of matches for him; his Wikipedia article has him with 393 senior club appearances and 121 senior national team appearances. He’s also faced some health concerns in recent years, including a knee injury before Euro 2016, and he may not have a ton of on-field support given the current rebuilding state of the Fire. We’ll see how it works out for him and the club, but it’s certainly a high-profile move.