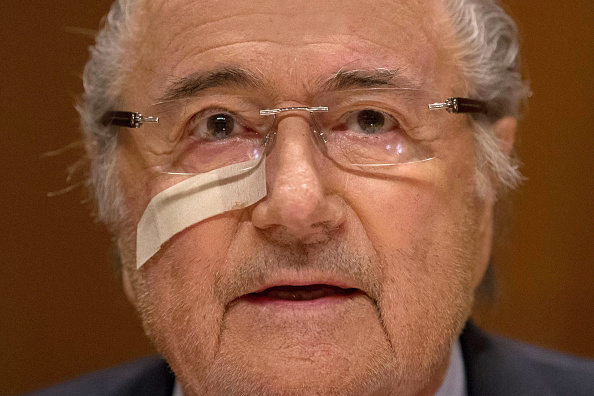 Walking into his own press conference after the sport he helped build and whose reputation he subsequently destroyed suspended him, long-time FIFA president Sepp Blatter wore a Band-Aid below his right eye.

He might as well have sported a black eye on both sides.

Earlier on Monday morning, Blatter had been notified by FIFA’s Ethics Committee – Haha, that’s a real thing – that he’d been barred from the sport for eight years. UEFA president and FIFA vice president Michel Platini received the same punishment. Things could have been worse. Had they actually been found guilty of corruption, rather than a conflict of interest and a “dishonest payment”, they would have been sidelined for life.

This means the 79-year-old Blatter won’t be allowed to enter the physical office of the position he still holds until February, when he has promised to vacate it in a special election to anoint his replacement. And it means Platini, 60, long considered the heir apparent, won’t get to run for the job. Now or in the next cycle in four years.

Here’s the delicious irony of it: the thing that apparently tripped them up is a $2 million payment Blatter made to Platini in 2011, when Blatter was up for his fourth term. Platini threatened to run against him. But a payment was made and, totally coincidentally *cough*, the Frenchman not only decided not to campaign but also fell in line behind Blatter with the European bloc of votes he controlled.

Both men claim that the payment was for legitimate work Platini did for Blatter at FIFA from 1999 through 2002, although neither could come up with a convincing reason for why it took so long for the money to come through. They had been suspended provisionally for 90 days back in October.

Blatter, of course, was defiant in a press conference he staged himself at, symbolically perhaps, FIFA’s old headquarters, having already testified for eight hours in front of the committee. He ranted against the press being informed before he was, questioned whether a committee could even judge its president – a pretty telling thing for a clearly power crazed man to say, especially considering that he himself created that committee – and vowed to fight for whatever he deems to be justice.

Platini has claimed his guilt was predetermined before any due process had taken place.

“The decision does not surprise me. I am convinced that my fate was already sealed before the heading on December 18 and that this verdict is just the pathetic cover-up for a desire to eliminate me from the world of football.”

The Ethics Committe said in a statement that Blatter hadn’t been able to “demonstrate another legal basis for this payment. His assertion of an oral agreement was determined as not convincing.”
Platini meanwhile, “did not show commitment to an ethical attitude.”

Uefa: "Once again, UEFA supports Michel Platini’s right to a due process and the opportunity to clear his name.”

But this thing isn’t yet over. Both men are expected to appeal to the Court of Arbitration for Sport. “I believe in God and I believe in the law. … I will fight until the end,” said Blatter, who has suddenly become publicly pious lately. “I’ll be back.”

Blatter and Platini will probably both push the CAS for a quick hearing and decision. The former would like to preside over his final congress – he probably wants to control his own exit, obsessed as he is with his legacy. The latter seems to still hold out hope that he can run.

And a quick resolution would serve soccer best. Because for as long as these men linger around the sport, in whatever diminished capacity, there is no chance for real and credible reform. They aren’t the problem so much as symptoms of it – greedy men allowed to take advantage of a corruptible system. But so long as they and their shamed colleagues remain, while the chance exists that they might return in some capacity, the heavy pall they cast will cloud the process.

Change first requires the appearance of it. The International Olympic Committee couldn’t convincingly clean up its act and image until the old guard was gone, even if that band of crooks was merely the latest generation of heirs in a long line of succession.

Monday’s punishments represented a significant step forward for the world’s favorite sport. But it won’t be able to truly move on until, to borrow from the Munchkins in The Wizard of Oz, the witches are dead.