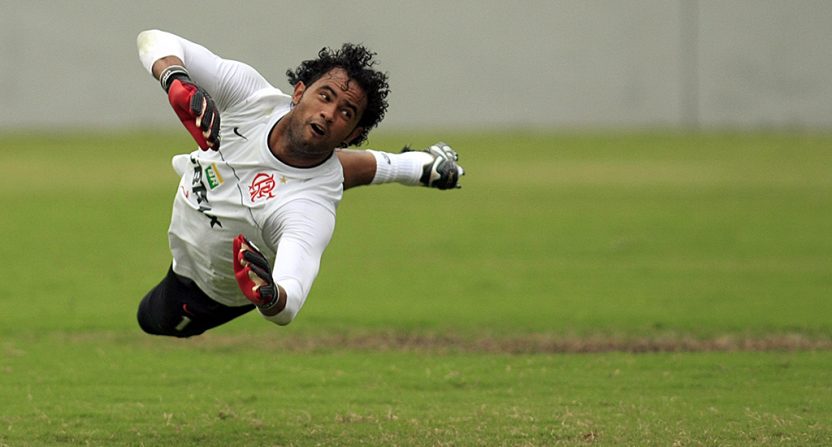 After just over a month, it looks like Bruno Fernandes das Dores de Souza’s tenure with Brazilian second-division club Boa Esporte has come to an end. Until last month, Souza was serving a 22-year jail sentence for allegedly telling friends to brutally murder his ex-girlfriend Eliza Samudio, then cut her body up and feed it to dogs while he watched back in 2010. Now, he’s going back to prison.

Souza was released in March pending an appeal, and the club controversially signed him, causing plenty of outrage (and leading to five sponsors abandoning them). However, his appeal has now been denied by the Brazilian Supreme Court, and he’ll be returning to jail. Here’s more from The Associated Press:

Brazil’s Supreme Court decided on Tuesday to deny an appeal to Boa Esporte goalkeeper Bruno Fernandes de Souza, who was released in March while appealing a 22-year sentence in the 2010 killing of Eliza Samudio.

Souza’s brief return to football was marked by widespread criticism among fans and players, with Boa Esporte losing five sponsors since the announcement. But others supported the former Rio de Janeiro-based Flamengo star.

The 32-year-old Souza was in jail for ordering a friend to murder Samudio and conceal her body.

Here’s what Souza was accused of doing back in 2010:

During the alleged confession, the cousin details how he worked with two of Bruno’s friends — Luiz Henrique Ferreira Romao, nicknamed “Spaghetti,” and former policeman Marcos Aparecido dos Santos, known as “Bola.” Both men have been arrested in connection with the investigation.

The woman’s body was taken to an undisclosed location where her remains were fed to several Rottweilers, police said.

This decision perhaps further illustrates how silly it was for Boa Esporte to sign Souza in the first place. He wasn’t cleared of the charges, but only released pending appeal. The club president wrote that the team was “giving work to those who intend to recover,” and the team wrote that he “deserves a new opportunity as a professional,” but both of those would have been a much easier sell if they’d waited for the actual outcome of his appeal. Instead, they’ve lost a bunch of sponsors and angered a lot of fans, and for what? Even Souza’s comments after his release weren’t impressive:

Dude, what happened, happened. I made a mistake, a serious one, but mistakes happens in life – I’m not a bad guy. People tried to bury my dream because of one mistake, but I asked God for forgiveness, so I’m carrying on with my career, dude. I’m starting over.

There might be a few people out there who see this as more than “one mistake” and think Souza is, in fact, a bad guy. But Boa Esporte decided to sign him anyway, and they got his services for a month before he was sent back to jail, plus a whole lot of accompanying bad publicity. Hope it was worth it.