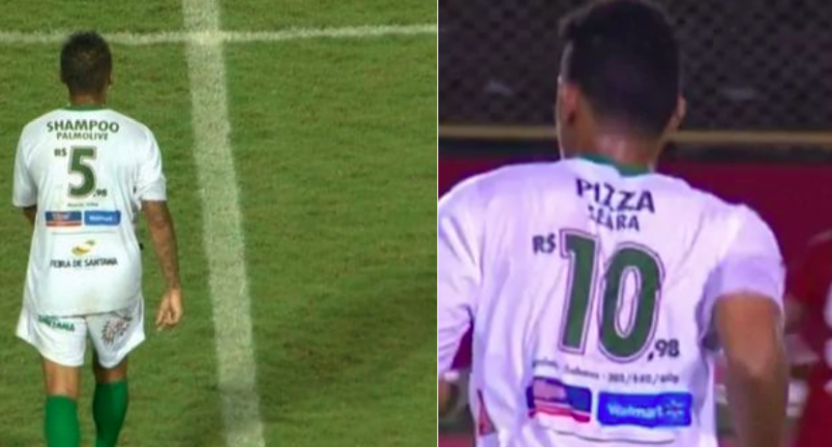 Jersey ads have been a huge point of contention recently for American sports fans. The NBA is going to become the first major pro sports league to adopt jersey sponsors and it’s probably only a matter of time before others join suit. Besides, what else do sports franchises like more than making money? And if they have to make you feel a little less cool wearing your adult 2XL jersey out in public, then so be it.

But really, it’s not that big of a deal because jersey sponsors are fairly common all around the world. Buuuuuut I think we might all agree that this Brazilian soccer team might have found the Event Horizon of jersey sponsorship. They’re geniuses, but this is probably the logical end to where sporting ads can go.

Here’s how the team website describes the new sponsorship with some help from Google Translate:

Fluminense de Feira surprised fans and spectators by presenting different names and numbers on the game shirt. Despite the defeat in the classic against Bahia de Feira by 2 to 1, what was most noticeable during the match was the price of shaving foam, stamped on one of the uniforms: $ 20.38. In an interview with Bahia News, the team’s marketing director, Xiko Melo, explained the marketing move with the DM9 agency and the club’s master sponsor: instead of the numbering of the athletes, an offer from a supermarket chain. “We are always looking for new partners, innovations, and this work was developed in one of these partnerships. In each game, we will bring different offers,” he said. Melo said that logistics, however, is very difficult. “It’s not a very easy thing to keep changing the shirt every game, since the material is printed on the shirt, it’s not something that’s added afterwards. So much so that the shirts that are going to be used tomorrow With the new offers being rolled out today, we receive the prices, check the numbers and send them to the industry.

Contacted by BN, Melo criticized the sponsorship system for smaller clubs. “Football is very ungrateful to small teams on this sponsorship issue. Is that the question of ‘who was born first, the egg or the chicken?’ Because you can not put together a good team without conditions and having a good team requires resources. We had a few sponsors in the beginning, so we decided to have sponsors per game.Has a college, for example, that announced in just one game.Another are already entering the final stretch of the championship.We started selling cheap And we have been gradually improving. Ideally, for us, it would have a financial structure already set up, but in the meantime we will change the tire with the car in motion, “he lamented.

Hey, if you’re a small team trying to make ends meet and get by why not try something like this? Not only will it probably bring in some decent coin, it’s a good way to generate some worldwide publicity for your club. Now we can look forward to about a dozen minor league American baseball teams trying out the same idea.