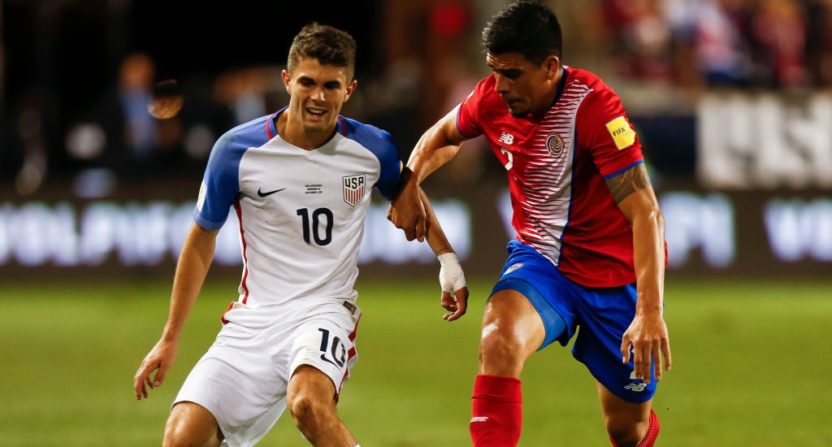 That raises the question as to whether the manager feels it’s better to try and put all of those players on the field at once, necessitating some creativity with some of their positions, or whether he should drop one or two to the bench in favor of an inferior player who is far more of a fit at his position. (Think of England dropping Frank Lampard for Gareth Barry in the late ’00s.)

It’s no surprise Bruce Arena currently finds himself in the same position with the USMNT. Since taking over for Jurgen Klinsmann in January, the narrative has been that Arena immediately decided to focus the team around then 18-year-old Christian Pulisic.

The decision to build a team around an 18-year-old is not an easy one. That’s not to say it’s not the right one — Pulisic is the best player on the US team by far — but doing that would likely require taking veterans who have played on this team for a long time and giving them new roles that come with a drastic drop in playing time.

In Arena’s first two home World Cup Qualifiers, as well as Friday night against Panama, he installed Christian Pulisic as a no. 10 in the top of a midfield diamond. The position allowed the US to play with two strikers up top (which is Jozy Altidore’s preferred position), while also giving Pulisic a free attacking midfield role. The change in shape, made specifically to accommodate Pulisic, gave the US plenty of attacking options, but left the US more exposed at the back, with Michael Bradley serving as the lone holding midfielder.

While no team made the US pay, the lack of midfielders would eventually be exploited and certainly does not look to be an option against the kind of opposition you would face at a World Cup. You may be able to get more scoring chances, and the US has proven that with a Hex-best 16 goals scored. But despite a 4-0 win to Panama, it can burn you more often than it helps as the USMNT allowed 11 goals, where Mexico, Costa Rica and Panama have only allowed four, six and nine goals respectively.

During his first seven games in charge, Arena tried to have his cake and eat it too, by getting his best 11 players on the field but focusing the team around Pulisic. It hasn’t worked.

What Arena needs to do is build the team around Pulisic. That means when he picks his team, he needs to start with Pulisic and go from there. Where does he want Pulisic to play, as a number 10? OK, you put him there and move on to the next player.

Who is going to be the second player on the team sheet? For Arena, that’s likely Michael Bradley, which means the next question is where is Bradley at his best? The answer to that is as a number six.

Now Bruce must ask himself, can I get away with playing Bradley as the lone holding midfielder? As we’ve learned the answer is (or rather should be) no. Bruce has a tough question to ask, wanting to play with two central midfielders and Pulisic above them, which means he would either have to sacrifice a striker, or play with a back three.

For argument’s sake, let’s say he chooses to play with four at the back and a lone striker up top (even though Bruce could switch to a back three, a formation which I’ve believed for a year is the formation that best accommodates the United States’ talent) as he’s played four at the back in each of his home games.

You now have three players on the field: Pulisic, Bradley, and Wood. From there, you’ve figured out your formation and how you’re going to play. This won’t be a team that wins by playing crosses into the box. This is a team that will win by running, getting behind the defense and using their speed.

With that in mind, the obvious moves are to put someone like Kellyn Acosta next to Bradley, and Darlington Nagbe out wide where he can cut inside (and where he’s played his best for the US). If Nagbe is cutting inside constantly, you’ll need either Acosta or an attacking left back to fill in that space (giving the nod to Jorge Villafana).

With all the attacking players on the field so far, the situation may require Arena to play a more defensive-conscious player on the right wing, such as Ale Bedoya instead of a Jordan Morris or Paul Arriola, especially if he opts to have DeAndre Yedlin flying up the wing from right back.

When building a team, every decision you make regarding a player affects the next decision. Currently, Arena is picking his best 11 players and trying to shoehorn them into a formation that works. What he should be doing is starting with Pulisic, and building out from there. That will lead to more success.