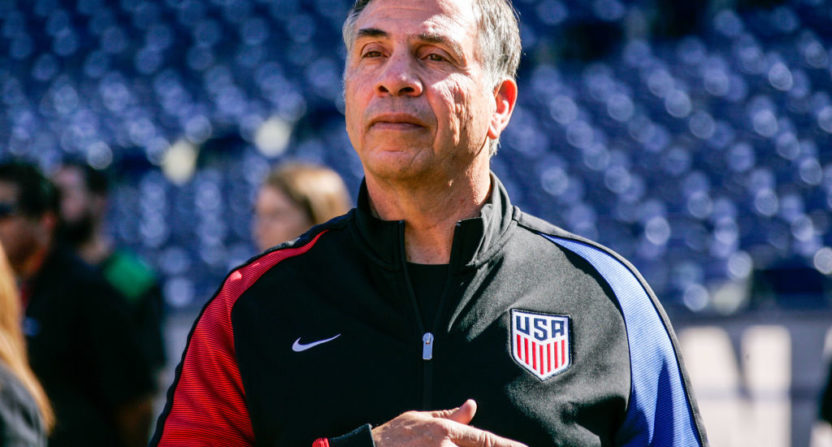 For the first time in what seems like forever, the USMNT convened with all of their top players in attendance. Ever since the 2014 World Cup, the U.S. has never been able to go into an important game with their truly best players fully available. Sometimes this was done by choice (Jurgen Klinsmann not bringing in Clint Dempsey at the start of World Cup qualifying to give others a chance), but most of the time whenever the U.S. came together you could count on seeing names like Jozy Altidore, Bobby Wood, Fabian Johnson, Geoff Cameron, or John Brooks, on the injured list.

Over the past two years, U.S. managers Jurgen Klinsmann and Bruce Arena have had a lot of questions about their lineups. Who are the two first choice strikers? Can DeAndre Yedlin be trusted at right back or is it better to shift Geoff Cameron out there (as Arena did in March)? Is Fabian Johnson a defender or a midfielder? Do we have a left back? Who partners Michael Bradley and where can you play Christian Pulisic so you can get the most out of him?

The U.S. has never had the chance to answer these questions because it seems that someone is always hurt. Jozy Altidore missed the Copa America which allowed Bobby Wood and Clint Dempsey to form a terrific partnership in that tournament. When they looked set to resume that partnership in World Cup qualifying, Dempsey went down with a heart condition.

At the back, Geoff Cameron and John Brooks formed one of the best partnerships at the Copa America Centenario last summer. Both defenders then went through injury plagued seasons that never saw them pair up again until this past weekend.

With the USMNT taking on Venezuela in a friendly to prepare for two more crucial World Cup qualifiers Bruce Arena named a team that answered nearly all those questions.

Arena lined the US up in a 4-4-2 diamond with Michael Bradley at the base and Christian Pulisic given the freedom to roam around up top of the diamond. Fabian Johnson was line up as a right midfielder in front of DeAndre Yedlin with Geoff Cameron and John Brooks resuming their partnership in central defense. Jorge Villafana started at left back for the third straight game. Up top it was Bobby Wood getting the call to partner Clint Dempsey and while it should be noted that Jozy Altidore wasn’t available for this game due to his brother’s wedding, it’s hard to see Arena making any non-injury related changes (John Brooks hobbled off in the 56th minute with an apparent hamstring injury) to his starting XI when the U.S. takes the field against Trinidad & Tobago on Thursday.

The formation isn’t without its flaws. Playing Michael Bradley as the lone holding midfielder is a dangerous game that would easily be exploited against good teams. But the thing is, Bruce Arena doesn’t have to worry about that right now. At this moment he’s not preparing to face a Germany, France, or Argentina at the World Cup.

Right now, Arena needs to worry about getting to the World Cup and in order to do that, the U.S. needs to be ready to beat CONCACAF teams. Those CONCACAF teams tend to sit back when they play away games in the United States. Therefore having a second holding midfielder is rather unnecessary. Against better teams, such as Mexico who the U.S. face on Sunday, you would certainly want to slide a second midfielder next to Bradley and behind Pulisic, and that’s where Arena also succeeded in this match.

Bruce Arena has a difficult job on his hands. He wasn’t hired to be the long term fix. He was hired to get the USMNT to Russia in 2018 and manage them there. He only needs to be worried about the here and now, but anyone who doesn’t look even a little bit towards the future would be doing his country a disservice.

On Saturday night, Bruce Arena managed to look towards the immediate future (Trinidad & Tobago) as well as look a little further down the line (Mexico as well as years to come). In the second half, Arena brought on Kellyn Acosta and slotted the U.S. into a 3-4-3 formation with Bobby Wood playing as the lone striker (something that both Jozy Altidore and Clint Dempsey can’t do). The formation gives the U.S. more balance in midfield while still allowing Pulisic to have his attacking freedom.

At this moment, the U.S. isn’t fully ready to commit to a back three formation. As long as Clint Dempsey is in the team, and as long as he keeps scoring as he should be, the team is better with two strikers. However at this moment, that is likely the direction the team goes in the future. By even using the formation for 40 minutes on Saturday, it will help the U.S. develop the familiarity with it should they need to play that way as early as Sunday night at the Azteca.

There are still plenty of questions regarding the USMNT going forward. But in the first opportunity that Bruce Arena had with his full squad, he made a clear statement as to what his intentions are for how his team will play.