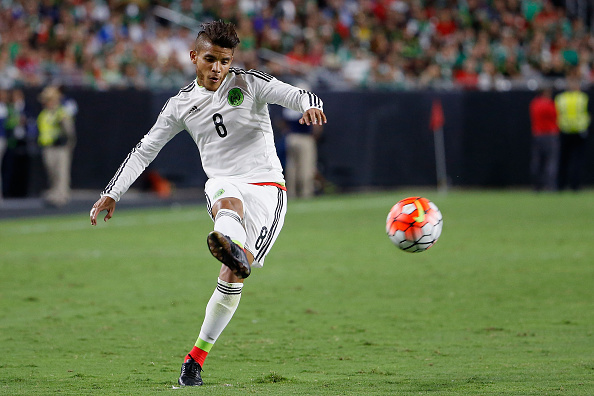 In a short while, the year will be 2016. Yet it still isn’t beneath some news outlets to speculate over which professional athletes might be gay.

Today, Mexican rag TV Notas featured not just a picture of two bikini-clad women on its cover, but also a story that Mexico and Villareal star Jonathan dos Santos was having some kind of gay affair with a teammate.

Once more: it’s almost 2016. But the witch hunt for gay soccer players apparently isn’t over in some countries. Nor are they yet beyond publicly outing people.

TV Notas, in a report quickly picked up by all manner of other Hispanic outlets, says dos Santos is in a relationship with Argentinian Villareal teammate Mateo Musacchio. The paper even portends to know, from “a close source” of course, that they’ve been together for seven months.

Oh, and that Jonathan’s older brothers Giovani and Eder, both pro soccer players as well, are apparently supportive and happy for him.

As supporting evidence, some outlets reposted Instagram pictures of the two 25-year-olds together, although they don’t even touch in the pictures or appear as anything more than friends in any of them. And never mind that both have pictures with plenty of other teammates on their Instagram accounts as well. (A “friend” told TV Notas that pictures of women were just for posterity, to protect their contracts. Or something.)

But none of that is the point. What’s actually relevant here is that for all the progress made on gay rights in North America – although some provinces of Mexico still lag well behind – a newspaper like TV Notas still thinks dos Santos’s alleged homosexuality is a story worth carving out a little front page room for, next to the girls in bikinis. And again, that it’s totally unsubstantiated isn’t what matters.

Soccer has always been a dungeon of ignorance.

Mexican fans still like to call opposing goalkeepers a puto whenever he takes a kick. Google “racism” and “soccer” and you’ll be astounded by the naked and unapologetic bigotry that will flood your screen. It’s rampant among players, coaches, board members and administrators alike. Which is to say nothing of the hateful misogyny.

This is a top-down problem. Until quite recently, FIFA had no women in its executive committee, and now that there are, it feels mostly like forced tokenism. Suspended president Sepp Blatter is on the record with a whole host of sexist comments – suggesting that women’s soccer would be more popular if only it were played in tighter uniforms, for instance – and once even declaring that a player racially abused by an opponent should simply shake hands with him after the game.

That culture has festered far too long. Whereas American sports have often provided something of a beacon for its larger following, demonstrating acceptance and progress, if sometimes reluctantly, soccer typically holds its most devoted societies back. (Major League Soccer is the big exception, with its demonstrated commitment to diversity and tolerance.)

Soccer stadiums have historically been places where anything goes. That’s where extreme political groups show their colors, where it’s okay for one grown man to call another every name under the sun in the presence of his sons.

Which isn’t to say that soccer itself is directly at fault for a Mexican newspaper “outing” a player. But the culture that surrounds the sport isn’t conducive, exactly, to labeling such a subject gauche. In its inflated bubble of conservatism, machismo and chauvinism, soccer still keeps up the silly pretense that there’s no such thing as homosexuality in its ranks. And within that framework, a player being gay or not can still be sold as some kind of juicy story.