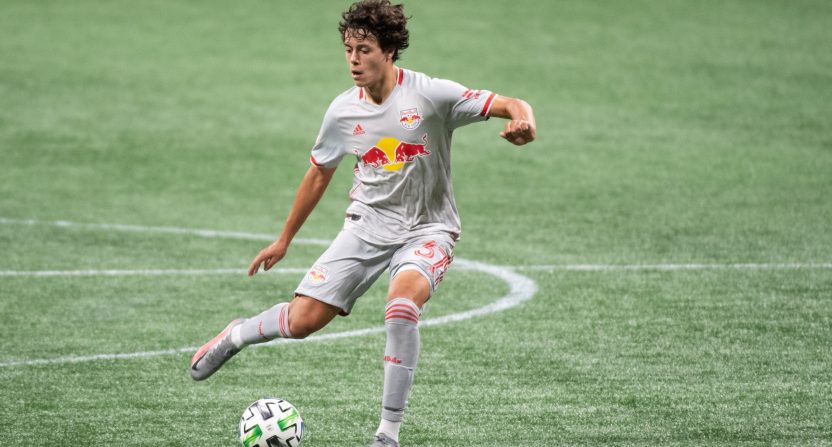 There’s been a lot of talk about the current crop of young Americans playing at a high level in European soccer.

And while it might be a tad early for the Golden Generation label (or curse, for pessimists) another very talented prospect made his professional debut this week in MLS, and he’s already scored two ridiculous goals in as many matches.

That would be Red Bull NY 17-year-old midfielder Caden Clark, who tonight put away this impossibly cool golazo to equalize against Toronto FC, in a match that ended up finishing 1-1.

Clark only signed his deal with the Red Bulls the day of his first match, in which he started and delivered this beauty of a volley.

Clark might not be 17 and already starting for a top Bundesliga side like, say, Gio Reyna at Dortmund (or Pulisic before him.) But just because he’s starting out in MLS doesn’t mean he’s not on European radar.

From the MLS league site:

As for how far Clark could go, Matthew Doyle teased that he could reach the Bundesliga in a couple years. Unlike how Philadelphia Union midfielder Brenden Aaronson is reportedly first going to RB Salzburg in Austria, Clark appears on a fast track for one step above.

“I’ve heard from reliable sources that the deal he signed has a clause that come 2022 he’s off to RB Leipzig, not Salzburg,” Doyle said. “The Red Bull mothership is that high on the kid that they think he’s a player for a top three or top four Bundesliga side. He has looked the part every time he has taken the field this year, whether it was in USL or MLS.”

That would put Clark on track to a top German club while he’s still a teenager, which definitely makes him one to watch for. Of course, if he keeps scoring a goal every time he hits the field, he might not have to wait until 2022 to get a bigger shot.

The team put together a fun look at his crazy first day here:

Obviously the odds of all of these kids panning out and leading the USMNT to a deep World Cup run are very long. But considering how dark things have been for national team supporters in recent years, it’s nice to have something to dream about.