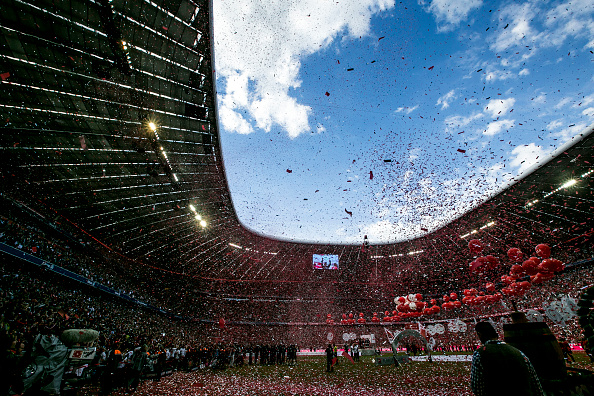 This weekend, the Bundesliga kicks off for the 55th time. It will be the fifth straight year that Bayern Munich opens the league on Friday night as champions. The Club known as Der Rekordmeister, or record champions, has had a stranglehold on the Bundesliga for half a decade. Since 2012, no club has come close to touching Bayern on a domestic level.

Last season was the closest anyone came to upsetting Bayern’s dominance. Controversial newcomer RB Leipzig battled the Bavarian giants before falling back in the second half. Leipzig’s emergence along with a talented and young Dortmund side could be the average Bundesliga fan’s only hope of a new champion this year.

Let’s take a look at how Bundesliga stacks up going into the new season.

15 hours of live programming across 2 networks! The new @Bundesliga_EN season kicks off this week on @FOXSoccer! Don't miss it! pic.twitter.com/Ecsxa495hV

This summer was one of transition for Bayern Munich. Their captain, Philipp Lahm, retired, as well as midfielder Xabi Alonso. As a result, the squad has gotten younger. Bayern’s club president Uli Hoeness suggested the team would re-focus their efforts on developing young talent.

While many of Europe’s biggest clubs have spent freely this summer, Bayern has been cautious about opening their checkbook. The club has spent €69 million this summer on a number of new players. That sum could have bought Bayern one of Neymar’s arms.

Bayern’s big money signing this summer was French Midfielder Corentin Tolisso, who arrived from Lyon for €41.5 million. Tolisso will replace Alonso and has already looked at home next to free transfer Sebastian Rudy from Hoffenheim. Tolisso and Rudy will have to fight for time, however, with players like Arturo Vidal, Renato Sanches, and Thiago Alcantara. The latter had a sensational season in Munich last year. Thiago was probably Bayern’s best player in the previous campaign.

Such is Bayern’s depth in midfield that they opted to replace their long-serving right-back with midfielder Joshua Kimmich. Kimmich is almost a young copy of Lahm in a physical sense. In terms of a career arc, he’s shockingly similar to the World Champion as well. Lahm also started his career as a midfielder, so Bayern hopes that the 22-year-old Kimmich can travel a similar path.

Defensively, Bayern has a deep squad as well. Niklas Süle, a young centerback who arrived with Rudy this summer from Hoffenheim is a future star for club and country. Paired with players like Javi Martinez, Mats Hummels, and Jerome Boateng, Bayern will have a strong defensive structure. Last season Bayern dealt with a lot of injuries at the back, so reinforcements were needed.

Let’s not forget Bayern’s biggest potential x-factor: James Rodriguez. Die Roten brought in the Colombian on loan with an option to buy from Real Madrid. Expectations for James have varied wildly, depending on who’s asked. There still isn’t a clear indication where the midfielder will fit at Bayern, but if James can rediscover his World Cup form he’ll be a fantastic addition to the squad.

So how do you stop Bayern?

On paper, this is Bayern’s league to lose. It’s hard to imagine they let Leipzig or Dortmund catch them, but it could happen. Bayern would need to struggle mightily, or their opposition would need stunning seasons. In all likelihood, both these things would need to happen.

Bayern has spent well to upgrade their midfield and their defense. The two areas they didn’t upgrade are keeper and attack. They didn’t upgrade the keeper because Manuel Neuer still exists. If he’s healthy the whole year, then he’s the best keeper in the world. But in attack, Bayern’s decision to not buy a backup striker is puzzling. Robert Lewandowski is a brilliant player, but asking him to be fresh and healthy all season is playing with fire. Bayern could use Thomas Müller in a pinch but he’s not a natural striker the same way Lewandowski is. Not to mention, Müller’s 2016-17 season was an absolute disaster.

While Bayern has gotten younger in most areas of the pitch, the wings still belong to Franck Ribery and Arjen Robben. The duo is pushing into their mid-30s and Bayern’s bench here is incredibly thin. It consists of Kingsley Coman and no one else. Serge Gnabry was bought from Werder Bremen, but was sent straight out on loan.

If Bayern deals with any kind of injury trouble up front, they could find it incredibly hard to score goals this year, and that would be trouble. It seems the best way to stop Bayern is to hope they stop themselves.

The main rivals in the Bundesliga will most likely be RB Leipzig and Borussia Dortmund. Both clubs have deep squads and plenty of youth on their side. Dortmund stumbled on occasion last year but was one of the league’s most exciting teams. Striker Pierre Emerick Aubameyang was the Bundesliga’s top scorer, and he’ll likely be around the top of the goal scorer leaderboard again this year.

The biggest change this season for BVB is the arrival of new manager Peter Bosz. Bosz replaces Thomas Tuchel, who was abruptly fired last year after winning the DFB Pokal. His replacement has continued the club’s tradition of a high tempo, quick strike attack. With Aubameyang alongside American Christian Pulisic and Ousmane Dembélé, Dortmund should have more than enough firepower to keep up with their Bavarian rivals.

Defensively, the club has also looked to improve, signing centerback Ömer Toprak from Leverkusen. Dortmund conceded nearly twice as many goals last season as Bayern did. Toprak should help his new team shore up their back line. If Marc Bartra takes a step forward this season under Bosz, then Dortmund have the makings of a very well-rounded side.

The issue with Dortmund, however, is the unrest of players like Dembélé and Aubameyang. The young Frenchman has been suspended by the club for refusing to show up to training. Meanwhile, their prized striker has been not so subtly flirting with AC Milan. If Dortmund has any hope of winning the league, they must hold onto both players.

Out east in Leipzig, Ralph Hasenhüttl is hoping to get his side to take another step forward in their quest for a Bundesliga title. The good news is that Leipzig has done well to hold onto many of their star players from last year, for now. Liverpool has been trying to swipe Naby Keïta and Timo Werner has started turning heads as well. Leipzig has spent €37 million this summer, suggesting they intend to try and keep pace with the big boys.

Last season, Leipzig looked like a real title challenger for much of last season. Another season with the same young squad mostly intact should really put pressure on Bayern. The real question mark about Leipzig will be the Champions League. This will be the first season the club plays in Europe. They have a young enough squad that they should be able to keep fit despite the extra games, but if not it could cause plenty of league hiccups.

There isn’t likely to be a surprise team shooting up the table this year to challenge Bayern, either. Bayer Leverkusen has lost a number of star players this year. It’s likely that the Werkself will struggle to even make the top four. Hoffenheim might have one of the games’ brightest young managers, but they too lost players and lost them to Bayern no less.

For anyone not waving the red and white of Bayern Munich, it’s shaping up for another disappointing season. RB Leipzig and Borussia Dortmund might have the best chance to upset the 27-time winners, but they are decidedly not favorites. Bayern just might have a little bit too much for either of them. But, that’s why they play the games.

** It’s going to be a good year for Americans. Pulisic will surely see his playing time increase at Dortmund. He had a strong preseason, including a goal in the German Super Cup. Bobby Wood should help lead the line in Hamburg. While the Bundesliga’s dinosaur could be in real trouble this year there is hope. If Wood has a strong season he could help keep the club up. Finally, John Brooks makes his new home in Wolfsburg. The talented defender should help out a very poor Wolfsburg side that just narrowly avoided relegation last year. Brooks will be the main man for his new club’s defense.

** Stuttgart and Hannover make it back into the Bundesliga after short trips down to the lower divisions. The two teams are famous clubs in Germany who have fallen on hard times. The two sides have combined for seven championships over the years. For the history of the league, it’s good to see these two make a return.

** Speaking of famous clubs, 1. FC Köln will be making their return to the Europa league this year. Only a few years removed from the second division, the Billy Goats finished fifth last year, and have spent €34 million in an effort to boost their squad for those tough Thursday night matches. SC Freiburg almost made it into the Europa League group stage as well but failed to get passed the final qualifying round. It’s a shame as their sensational stadium, which backs up to the Black Forest, won’t get to host more European nights.