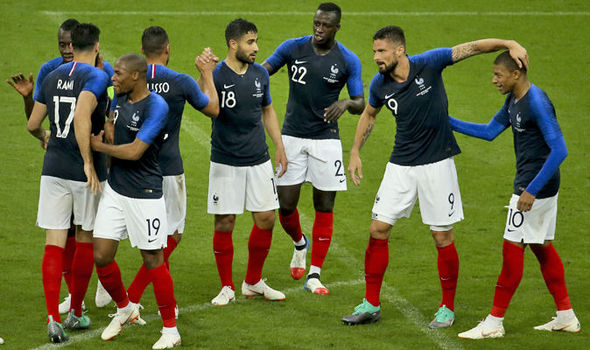 Of the field of 32 competing in the 2018 FIFA World Cup there may not be a team that divides fan sentiment quite like France. Traditionally speaking, Les Bleus are one of the big powerhouses in international football. They always seem to be very talented, and yet no team has had a bigger up and down roller coaster than the French when it comes to the World Cup.

Four years between World Cups is a long time in international soccer but France makes it seem like it’s a lifetime.

In 1994, France didn’t even qualify for the World Cup, four years later they won the whole thing on home soil. In 2002, the team picked up just one point in the group stage, only to lose the final on penalties in 2006. In 2010, the team famously mutinied away from their coach in an embarrassing group stage exit only to come back four years later and suffer a 1-0 quarterfinal exit to eventual champion Germany. And don’t even get me started on their appearances in the Euros.

The knock against France has never been a lack of talent, but rather their mental state. Somehow no matter how much talent they have, something always goes wrong.

Once again, talent won’t be an issue for this iteration of France which oozes with it at nearly every position. On paper, France are easily one of the three best teams in the world. They have a rare combination of being a young but experienced squad as they made the final of the Euros just two years ago, beating another tournament favorite Germany 2-0 in the semifinals.

It’s very easy to make the argument that France will win the 2018 World Cup, but make that argument to anyone and they’re likely going to respond to you by saying “Yeah, but they’re France. They’ll find a way to screw it up.”

That’s going to be France’s biggest issue this year. Will Les Blues be able to stay out of their own way and that starts with manager Didier Deschamps.

Unless France have to play Argentina (Messi), Brazil (Neymar), or Germany (that defense) you can make the argument that France will have the best players at every position on the field. That’s probably true, but fitting them into a cohesive team is a much more difficult task.

Looking at France’s midfield and attack there are five players that pick themselves when trying to come up with a starting XI. N’Golo Kante, Paul Pogba, Blaise Matuidi, Antoine Griezemann, and Kylian Mbappe. In theory that should make France’s tactics simple. Play a 4-3-3 with either Griezemann or Mbappe in the middle and stick one of Ousmane Dembele, or Nabil Fekir as the other wing and run teams to death.

There’s just one problem with that. Didier Deschamps loves Olivier Giroud. He loves him so much that his insists on starting him as the central striker and playing through him, even though he doesn’t quite fit with the rest of the French team.

This creates a whole bunch of problems within the French team. When Giroud is on the field it seems as if France’s tactics are something along the line of “all of our talented creative players have the freedom to do whatever they please as long as that ends with a cross to Giroud.” This didn’t work in the 2016 Euros and it didn’t work last weekend against the United States, who played ultra defensively with a back three that had 12 caps combined – exactly how smaller teams will play against France at the World Cup. It was only after Giroud came off that France started to look really dangerous.

Giroud left the US game with a bloody head injury but is expected to be ready for France’s first game in Russia.

Giroud certainly brings an element to the French team that no one else does, but whether France needs that element from the get-go is a whole different question. As Arsenal knew, and Chelsea found out, Giroud is a tremendous player to bring off the bench when your team is chasing a goal, but there is definitely something to be said about Giroud playing for two different clubs this year and being unable to crack the starting XI at either. Even worse for Giroud, neither of the strikers that were preferred over him even made their World Cup squads.

Deschamps’ insistence on jamming Giroud at the top of a 4-3-3 is odd not just because France have so much other talent, but because we know it doesn’t work. France played this way in their first two matches of Euro 2016 and never looked in-sync. They were looking very likely to drop points in both their opening matches if it weren’t for the late set piece brilliance of Dmitri Payet.

It was only later in the tournament when Deschamps dropped Kante in favor of Moussa Sissoko of all people and a two-man midfield that France really took off. Therein lies what Deschamps’ biggest issue is going to be; on a team with all this talent what is his best team? It could be dropping to a two-man midfield and playing Griezemann underneath Giroud, or it could be dropping Giroud for someone else. The question is will Deschamps be able to figure it out and make the call?

Plenty of people are looking at the lack of experience on France’s backline as their Achilles heel this tournament. While there are questions about almost every contender’s defenses, the truth is if Deschamps gets his midfield and attack right that would negate any weakness the defense brings. But if he doesn’t, it won’t matter if the defense is good or bad anyway.