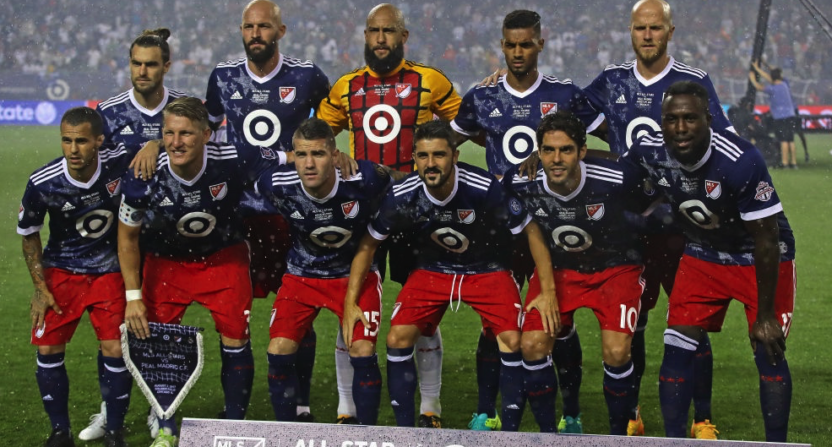 MLS being the sports league for the American future is a familiar narrative. It’s familiar because the league has been pitching that premise at least since I became a sportswriter about a decade ago. The argument possesses some merit.

Soccer did grow in popularity in the U.S. It won’t be America’s spectator sport for some time, if ever. But it has attained mainstream acceptance. Not everyone is a soccer fan. But outright soccerphobes are scarce, relegated to the same dark rooms as people who don’t accept baseball analytics.

MLS fans are younger than those of other leagues. The median age (40) is the lowest among the major leagues. MLS players and fans are more diverse than other leagues. The league has made a conscious effort to incorporate the Hispanic community, a significant portion of viewers.

The league has done a much better job cultivating support in new markets. Many are among the 10 clubs that averaged 20,000 or more fans per match in 2016. Attending an MLS match is relatively affordable and lasts only two hours. Ideal for both families and hip millennials with social media accounts to monitor.

Add those factors together. It’s only a time before MLS explodes, right? Well, not exactly.

MLS still can’t get people to watch it on TV. Sports TV rights have skyrocketed almost everywhere else except MLS. The league brings in just $90 million from its deals with ESPN, Fox, and Univision. That’s overstating it since that is a shared deal with U.S. Soccer, which fans do watch. It’s not certain how much MLS actually receives. For comparison, the English Premier League receives $166 million per year, just from its American TV deal.

The league sold MLS Cup Final ratings as records. But pierce the PR manipulation and they weren’t that spectacular. English language viewership in the U.S. did spike to 1.4 million. That’s about what one would expect moving from ESPN to Fox broadcast and not being aired against Sunday Night Football or the SEC Championship Game.

Count the 600,000 Spanish language viewers in the U.S. for an even two million. That’s still less than half the audience for the Stanley Cup Finals (on NBC) and about one-tenth the audience for the NBA Finals. An interesting poll would be to see what percentage of the sports audience could name a player on the 22 MLS teams, or even name the teams.

TV not being a revenue driver is a major problem. MLS has claimed nine figure per year losses in years past. The league’s Soccer United Marketing offsets at least some of that. The prime league revenue source seems to be charging expansion fees.

Multiple ownership groups are fighting for slots as the league expands to 28 teams. The league had 12 teams in 2006. MLS may go beyond even that 28. Current expansion fees have blown up to $150 million. Deadspin and others, with varying levity, have questioned whether MLS is a giant Ponzi scheme.

Of course, billionaire sports owners are in the business of fleecing local communities, not their fellow billionaire owners. The bet is MLS will keep operating losses sustainable as club values rise. It’s a cheaper, less risky endeavor than spending $1.3 billion to buy the Marlins.

MLS sort of resembles a tech stock. The fundamentals seem sound. There’s future growth potential. But just as Tesla needs to start mass-producing Model 3s, MLS must convert sports fans into soccer fans and American soccer fans into MLS fans. The plan for doing that still appears nebulous. We may get more “World Cup bounce” talk as the 2018 tournament grows nearer. That did not materialize in 2006, 2010, or 2014.

MLS does face a unique challenge other American leagues don’t: a better product in that sport that gets prominent billing on American TV. NBC has the EPL. Fox, at least for next year, shows the Champions League and the Bundesliga. There are other, better leagues beyond that.

The solution is clear: improve the product. What formula MLS uses to get there is anything but clear.

Designated player signings have had little impact. David Beckham raised the league’s profile. He left a far different league than the one in which he arrived. But there’s only one David Beckham when it comes to celebrity and marketing.

Some of international soccer’s biggest names – Kaka, Thierry Henry, David Villa, Andrea Pirlo, Steven Gerrard, Frank Lampard, Rafa Marquez – have arrived and gone with little impact. Bringing back USMNT stars such as Clint Dempsey, Jozy Altidore, Michael Bradley, and Tim Howard has achieved little. Even adding a Messi or Ronaldo may not do much.

A better long-term plan may be spreading money around more broadly to raise MLS’ median salary. But MLS remains a long, long way from even approaching the EPL in relative terms. Even if we credit MLS for earning the entire $90 million for the TV contract, that’s about $40 million per year less than Sunderland received in 2016-17 for finishing last and getting relegated.

Restructuring the league could be another option. A freer player market and salary cap would allow clubs with the will such as LA Galaxy to stockpile more talent. Adding promotion and relegation could see better talent flow to the top, and younger players get a better opportunity to develop in the bottom division. The trouble is predictability and cost control are what make MLS a compelling investment product.

The market is there for MLS to expand. It’s lucrative and thus the league will continue adding teams. But that comes at the expense of diluting the soccer product. It’s that soccer product that will make the ultimate difference between success and failure for MLS.