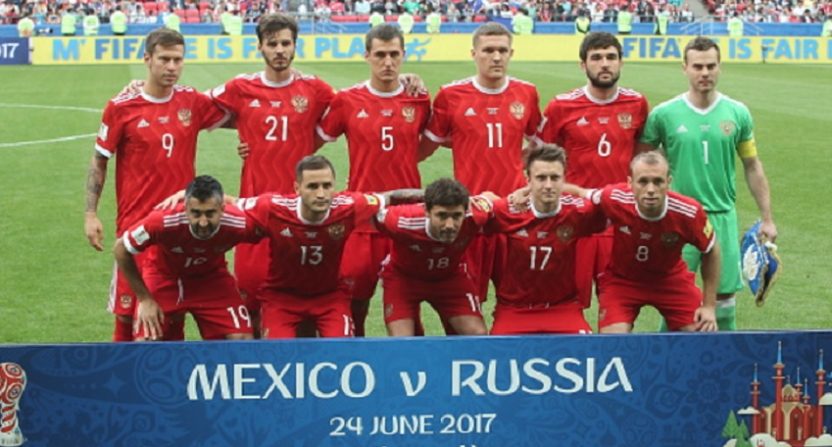 Russia will host the 2018 World Cup. Hosting the tournament tends to work out well on the field. Four hosts – England, West Germany, Argentina, and France – won the tournament outright in the post-war era. Another seven reached at least the semifinals. The only tournaments since 1990 where at least one host did not reach the semifinal are the U.S. in 1994 (improbably reached the knockout rounds) and South Africa in 2010 (drew Mexico, beat France).

Predicting similar success for Russia in 2018 is difficult. They stink. The Russians have not reached the knockout rounds of a major tournament since Andrey Arshavin led them to the Euro 2008 semifinals. Russia was eliminated in the group stage during the Confederations Cup. The FIFA rankings are far from decisive, but Russia sits 63rd, below Bulgaria and Scotland.

A healthy 23-man Russia squad would not feature a single player from Europe’s top five leagues. There are no top-level stars. The Russians conform to reputation during most outings: not that talented, not very athletic.

Countries host the World Cup to sell themselves at home and abroad. That’s a particular concern in Russia. Sporting achievements (along with geopolitical posturing) deflect from a dead economy. There’s a strong incentive for Russia to put in a good showing. That’s a clear concern since it’s Russia. It’s fair to question whether this will be an above board World Cup.

Doping could be an issue. Russia’s last major hosting duty was the 2014 Winter Olympics in Sochi. That event saw a massive, brazen, state-sponsored doping scandal that even extended to the Paralympics. Russian tennis stars and summer Olympians have faced suspension. In soccer, FIFA is investigating Russia’s entire 2014 squad for potential involvement with doping.

It’s trickier to dope in soccer than other sports. Players spend far more time with their clubs than with the national team. Even if Russian clubs were complicit, they still must submit to drug testing in European competitions. Almost every Real Madrid player had his blood and urine randomly tested before the Champions League Final.

Even if successful, doping does not guarantee success the way it may in other sports. A lot of soccer is technique. If the Russians were doping during the 2014 World Cup, it didn’t help them. They scored just two goals in group play and were eliminated by Algeria.

Match-fixing? That could get more interesting. The vulnerability is there. Declan Hill’s The Fix: Soccer and Organized Crime is a must-read on the topic. FIFA can’t police its internal corruption, much less take on international gambling syndicates across countries and continents. Fixing doubtless happens more than we think.

Outright fixing of matches in Russia’s favor seems unlikely. It’s much easier to work the other way, having the underdog lay down. Nation A will lose to Germany anyway. Nation A’s defender, far less well paid than his German counterparts, ensures the result is 4-0 rather than 3-0 to cover the goal spread. The result surprises no one. Getting a very well-paid German national team defender to risk his career and sink his country’s World Cup chances for money would be much tougher.

That said, soccer is a sport, like basketball, where a referee’s discretion can make a lot of difference. A slight, plausibly deniable, tendency to call fouls on the other side could swing a match. There will also be much suspicion after the draw if Russia miraculously ends up in the “group of life” with three beatable opponents.

None of this says Russia will cheat at the 2018 World Cup. But the Russian state has shown a clear will to cheat at sports. If one does want to cheat at soccer, there are many ways. The major body tasked with preventing it is… FIFA.