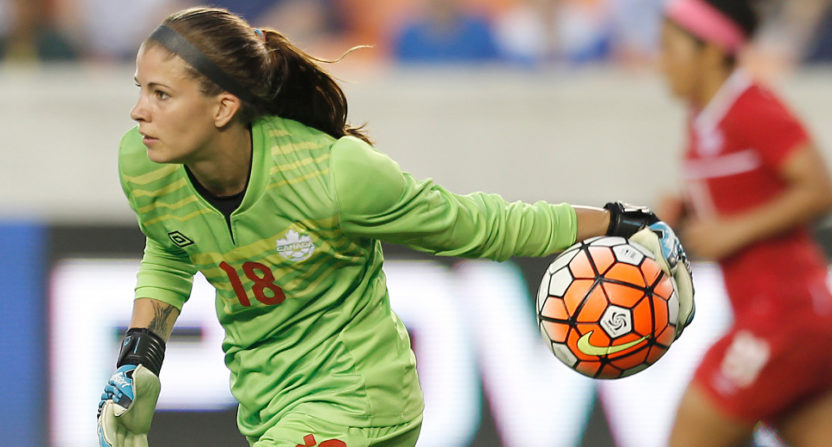 There was an unusual soccer move this week, with Canadian women’s national team head coach John Herdman suddenly leaving to take over the country’s men’s team. Despite this happening just a year ahead of the next Women’s World Cup, players from the women’s team were generally supportive of Herdman’s move, even with a few surprised at first but then later offering support. But several of them were not thrilled with a Toronto Sun article from Kurtis Larson discussing the move, which contained some controversial language implying differences between the men’s and women’s game. After Montreal Gazette/Howler Magazine writer David Rudin tweeted about Larson’s article, players Diana Matheson, Steph Labbé (seen above during a 2016 Olympic qualifier), and Allysha Chapman chimed in:

Let’s all check in on how the Toronto Sun is covering Herdman’s defection from #CanWNT to #CanMNT and try not to vomit at the sexism [h/t @DCU_Exile] https://t.co/Y8eAIseLMW pic.twitter.com/HXbIUbYsRu

Thanks for sharing David. I generally don't read articles about the WNT & Canada Soccer, but… wow, some fairly causal/dated sexism in this one. @TheTorontoSun, can we try to dig a little deeper for 2018? https://t.co/enQ3Q4sstk

I ain’t got no tactical knowledge in this lady brain I reckon https://t.co/r8RNblon9i

Let’s consider the entire passage in question from Larson’s article:

Herdman is meticulous in his preparation, with a demonstrated ability to cultivate young talent on the women’s side and get results. He has earned the opportunity that an informed source speculated he had been seeking since the Rio Games. Whether his skill set will translate remains to be seen.

A source close to Herdman warned he’ll have one opportunity to earn the respect of a testosterone-filled dressing room that will be far less emotional and far more skeptical of his ability to transition.

Herdman won’t get the benefit of the doubt, the source added. There’s no Algarve or SheBelieves Cup to sort things out prior to major World Cup qualifiers that are “way more” pressure-packed than anything Herdman faced with Canada’s women’s team.

The source invoked San Pedro Sula, Honduras, the site of Canada’s infamous 8-1 loss, as being far different from playing at BC Place in front of thousands of screaming pre-teens, donning red face paint and Christine Sinclair jerseys. Simply put: The stakes are higher on the men’s side.

Herdman’s going to get the chance to prove exactly how good of a manager he is.

The margin for error in the men’s game is razor thin. World Cup qualification, something that has eluded the men’s team for three decades, isn’t automatic like it is for Canada’s women. The depth of field is exponentially bigger.

Matches aren’t won via athleticism and emotion as they are in the women’s game. Results are secured through tactics and technical ability on the men’s side.

Hoo boy. Yeah, there are a whole lot of problems with writing that in 2018. The “athleticism and emotion” talk is bunk; there’s a whole lot of “tactics and technical ability” on the women’s side too, and it’s hard to say things are “way more pressure packed” considering some of the big matches that team has played in. Larson is certainly correct that World Cup qualification is harder for Canada’s men than the women’s team, as the men are currently 94th in the world and the women are fifth, and yes, the women’s team has made the Women’s World Cup in every instance since its 1991 inception, but they still face plenty of “razor thin” margins for error. They didn’t make it out of the group stage in 2007 or 2011, which led to Herdman’s hiring. There’s no dispute that coaching the men’s team will be a different task for Herdman, with plenty of its own challenges (especially given Canada’s lesser talent pool on the men’s side relative to the rest of the world), and there’s also no dispute that the men’s players may not instantly respect Herdman for what he’s accomplished on the women’s side, but this was a highly problematic way to try and make those claims. And it’s understandable why some of the Canadian women’s team players were mad about it. Writer Hannah Bevis noted something else in that article that stood out, though:

Although I will say I did enjoy the part of the article where the coach yelled at the Toronto Sun for not covering the women's team the same way they covered the men's. pic.twitter.com/tJBpw0YLpR

Hmm. I wonder why Herdman would have done that?