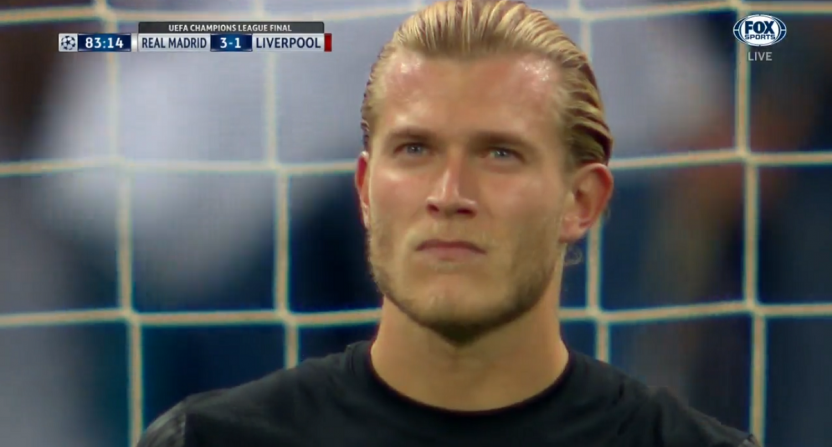 It was always going to be an uphill climb for Liverpool today in Kiev, and beating Real Madrid somehow became even more difficult when Liverpool lost Mohamed Salah to a shoulder injury early in the first half.

But the match was still goalless at halftime, though Real Madrid threatened almost immediately, with Isco finding the bar.

And just a few minutes later Karim Benzema broke the seal with this, which is the kind of thing that generally only works in FIFA on easy mode.

That’s Liverpool keeper Loris Karius totally losing his mind and essentially throwing the ball off Benzema’s boot and into his own net.

Liverpool came back right away, though, to their credit. And their goal was slightly more traditional:

Things stayed even until a fair bit into the second half, when Gareth Bale came on as a sub and almost immediately did something spectacular:

Good heavens was that great.

After that, Liverpool seemed a bit rattled, with Ronaldo getting free in space only to be denied by a challenge from Scottish left back Andy Robertson.

That was a necessary tackle, and its value was almost immediately realized when Sadio Mane found some space at the top of the box.

From there, it seemed like Liverpool might gear up for a fun final fifteen run at an equalizer. Except, no, that’s not what happened, thanks to a combination of Bale and Karius.

That’s so, so bad, no matter how fast it was traveling or how much it moved late.

I’m not sure I’ve ever seen more heartbreaking things happen to a single team in one massive game ever.

Real Madrid has now won four Champions League trophies in five years, a run of European dominance that befits a club of their depth and talent. Heading into today’s game, Liverpool was clearly not as deep as Real Madrid, but that doesn’t always translate to a win over one contest. But Salah’s injury changed everything for them, and no team is deep enough to overcome the loss of a player of that caliber.

And even then, taking out the two embarrassing keeper mistakes and it’s 1-1. That probably doesn’t help any Liverpool fans right now; in fact, it probably hurts even more. But it was still a very good run for Liverpool, and they’ll be a threat next year as well.

Real Madrid, meanwhile, is Real Madrid. They’re the definition of perennial power. This time next year, the smart money is on seeing something like this again:

What a fun, weird game. And if you know a Liverpool fan, please, buy them a drink of their choosing as soon as possible. They’ll need it.