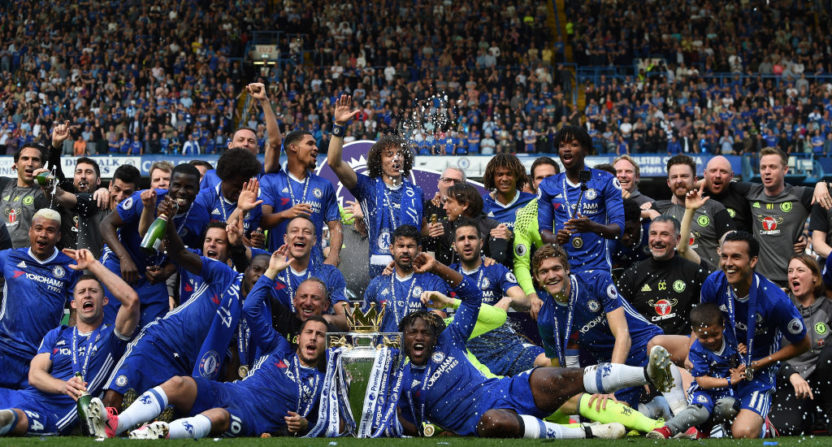 There’s an old sports saying that goes, “it’s a lot harder to defend a title than it is to win one.”

Players are more generally more motivated to chase trophies than to keep them, and that’s the challenge facing Chelsea as the 2017-18 Premier League season gets underway.

So can the Blues repeat? Sure they can.

Will they? That’s far less certain.

The odds makers have Antonio Conte’s side as one of the favorites to win the league, but there is quite a bit working against the reigning champions as the new season dawns.

With Neymar leaving Barcelona for PSG and Real Madrid making noise about selling Gareth Bale, Eden Hazard’s name is popping up in transfer gossip for both Spanish giants.

“I don’t know what Eden would be worth. I expect him to play with Chelsea, it is not the right moment to lose a player. I have great consideration for this player because he is top quality but I repeat I am the coach and I can give my opinion but the final decision is always the club’s,” Conte told the Daily Star.

Even if he stays at Stamford Bridge, he’s still recovering from an ankle injury and will miss at least the season opener at home against Burnley this weekend — and possibly the first month of the new campaign.

An argument can be made that, despite spending more than $156 million on players during the summer transfer window, the team isn’t better than last year’s version.

Throw in a front-loaded fixture list, with games against Tottenham, Everton, Arsenal and Manchester City before the end of September, and the title defense could be on the rocks early.

Hazard recovers quickly, sticks around and plays up to the form he showed for much of last season. N’Golo Kante and Bakayoko serve as the anchors for Conte’s 3-4-3 and youngster Andreas Christensen shows he’s ready to contribute in the team’s back three.

Morata works well with Pedro and Hazard as the team makes a deep Champions League run and does just enough to fight off the Manchester sides for another title.

Barcelona or Real Madrid throw crazy money at Chelsea for Hazard, and he leaves town. That creates a glaring hole at the front of the 3-4-3 that forces Conte to change systems.

The team struggles to adjust, flames out of the Champions League early and struggles to finish in the top four after a shaky start.

Hazard will ask for a transfer, but will be talked into waiting until next summer to make his move to Real Madrid. The Blues will be solid and in the hunt for the title for most of the season, but will ultimately lose out to either Manchester City or Manchester United.