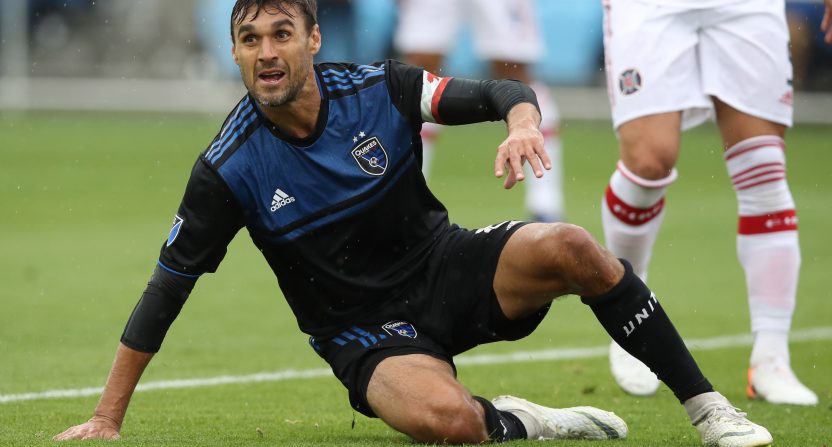 At 36, Chris Wondolowski isn’t the soccer player he once was. Players get older and when the longtime striker for the San Jose Earthquakes encountered a goal scoring drought he hasn’t experienced before, retirement whispers from fans and media may have gotten louder and louder since his last goal this past October.

Wondolowski clearly didn’t listen to any of that and with the all-time MLS regular season goal scoring record hanging over him, Wondo was determined to score just one more to tie Landon Donovan’s mark of 145.

It may have taken a bit longer than he wanted but when Wondolowski tied Donovan, he refused to stop. Wondo scored a career-high four goals and achieved his fifth career MLS hat trick to not only get the record but give the Earthquakes a 4-1 victory over the Chicago Fire.

Wondo’s 145th goal came in the 21st minute as he took advantage of Francisco Calvo trying to choose between marking Wondolowski or blocking a potential Shea Salinas shot on goal. Salinas discovered that indecisiveness and found Wondo for the tap in.

The 146th goal happened at the start of the second half. A very scrappy effort, Wondo took advantage of David Ousted dropping the ball in front of him and scoring from just a few yards away to break the record.

Now that the dam has burst, why stop at two? Seeing the goal in front of him, the ball fell to Wondo and he finished from just inside the box to complete his first hat trick since 2012.

WONDO HAT TRICK ARE YOU SERIOUS

And before being subbed off to a standing ovation, Wondo tacked on a fourth on the back post for good measure, accomplishing something even he hadn’t done at any point in his 16-year career.

Chris Wondolowski showed he’s still got a bit of fuel left in the tank with this performance. With people like Kei Kamara (119) and Bradley Wright-Phillips (107) climbing up the ranks, along with Josef Martinez’s 55 in just a little over two seasons, Wondo’s record may not last as long as Donovan’s did but this record is certainly deserving for someone who has done so much for MLS.