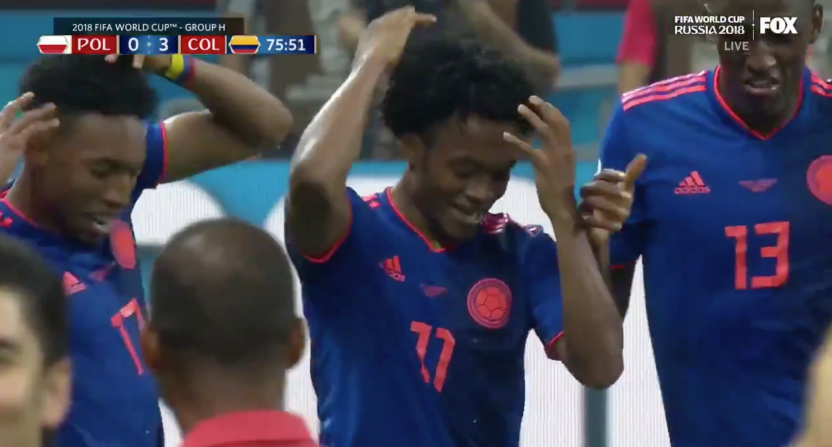 There was no team in the 2014 World Cup more fun to watch than Colombia. Led by young upstart James Rodriguez, the Cafeteros scored goals in abundance and danced exuberantly after each one. They were eventually bounced by Brazil in the tournament’s quarterfinals but not before delighting the world audience.

Well, after losing a man early and falling 2-1 in their opener at this summer’s World Cup, Colombia recaptured their 2014 magic Sunday afternoon, crushing Poland 3-0. Jose Pekerman’s squad dominated more or less from the first whistle, testing the Poles early and quickly breaking through with creative passing and brilliant finishes.

First, came a set-piece goal from Yerry Mina on a beautiful cross from James late in the first half.

What a ball by James! What a finish by Yerry Mina!

Colombia take the 1-0 lead late in the first half. 🇨🇴 pic.twitter.com/Yb9GMUCgd6

And finally, just minutes later, James delivered an impeccable pass to Juan Cuadrado, who buried a game-sealing goal and celebrated with a customary dance party.

THE DANCING COLOMBIANS ARE BACK!

Cuadrado finishes the breakaway after another beautiful pass from James and celebrates in style. pic.twitter.com/NBiJXM6MGF

Colombia’s victory Sunday was a much-needed one for a team that lost to Japan last week after midfielder Carlos Sanchez was red-carded in the game’s opening minutes, leading to a penalty kick and forcing his side to play a man down for almost the entire game. With Senegal and Japan having drawn earlier in the day Sunday, a loss would have eliminated Colombia from the tournament, while a tie would have left them considerable underdogs to advance.

But after Sunday’s 3-0 spanking, Poland finds itself knocked out, while Colombia needs only a win over Senegal on Thursday (or a draw and a Japan loss) to reach the knockout stages, where Belgium or England will wait. If James, Falcao, Cuadrado and company keep playing as they did Sunday, there will be a whole lot of dancing ahead of them.