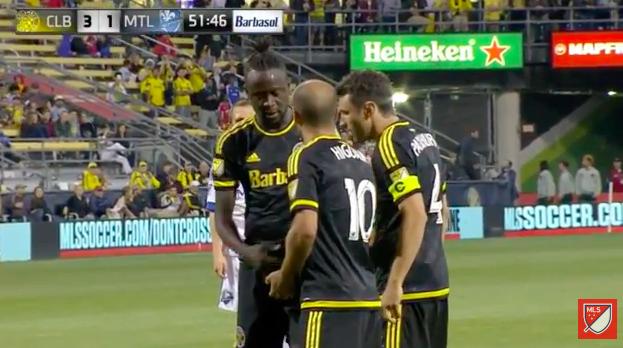 After a great 2015 season that saw them make the MLS Cup Final, the 2016 season for Columbus Crew SC has been a catastrophe thus far.  One of the favorites for this year’s Supporters Shield currently sit in 9th place in the Eastern Conference with just nine points after nine games.

It all boiled over in unfathomable circumstances on Saturday night.  Up 3-1 over Montreal Impact, Crew SC were given a penalty.  All-Star striker Kei Kamara attempted to take the PK to complete his first MLS hat trick, but was stopped by fellow Designated Player Federico Higuain.  The two then argued like it was a scene out of StepBrothers until finally captain Michael Parkhurst had to step in to settle the dispute after a lengthy delay.

Higuain finally did take the penalty and converted, but the Crew quickly fell apart thereafter.  They allowed two quick goals to the Impact and then succumbed to an equalizer in stoppage time for a 4-4 draw that felt like a loss.

On the bright side, at least Higuain and Kamara didn’t resort to actual fisticuffs on the pitch because we have seen that before in top flight soccer.  However, the penalty kick drama between the two was only a taste of what was to come in a public airing of locker room grievances.

After the game, Kamara called out Higuain by name in an astonishing no-holds-barred criticism of his teammate:

Kamara on Higuain taking the penalty: "That’s selfishness. That’s not a teammate." #CrewSC

Kamara says he hasn't "had to depend on Pipa at all." I don’t depend on him. I depend on Ethan…on my outside backs to pass me balls."

Did Kei tell Higuain he was on a hat trick? "Do I have to tell him? The whole stadium sees it. Did you see it?" #CrewSC

How will Kei move on? "Just don’t depend on him for assists or balls or nothing, just continue playing the same way I’ve been playing here."

Kamara: "To me and to the relationship to believe in my (number 10), my playmaker, there is none. I never have to worry about it." #CrewSC

When was the last time you saw one teammate call out another like that in public?  Kamara’s issues with Higuain definitely seem to go way beyond their playground-like argument over who was going to get to take that particular penalty kick.  In fact, it may go back to last year, when Kamara fell just short of winning the MLS Golden Boot to Sebastian Giovinco on an assists tiebreaker.  Who took PKs last year?  You guessed it, Higuain.

And now it seems to be affecting the Crew on the field.  When your star striker and #10 aren’t operating in the same universe, let alone on the same wavelength, it’s going to have a negative effect on your team performance no matter how good you may be.

You know when you’re playing a FIFA video game with someone and you refuse to pass them the ball even though they’re wide open because you want to score yourself?  That’s pretty much Kamara and Higuain right now.

Crew head coach Gregg Berhalter is highly thought of in MLS and American soccer circles, maybe even as a future coach of the national team.  His forward-thinking, attacking brand of soccer has been a revelation thus far in Columbus, but this is by far the biggest challenge of his young coaching career thus far.  Nevertheless, even Berhalter can’t escape the blame on this one because, inexplicably, the Crew didn’t have a designated PK taker coming into the game and it was up to the players to decide:

You would want that to be handled in a much more professional manner. I think that’s what I’m concerned about, and that’s the heart of the matter. I said yesterday that I take full responsibility for that. I didn’t handle it the right way. I designated two shooters and left it up to them, and that was my mistake. I’ve certainly learned from that.

Maybe Berhalter deserves some of the blame here, but if you can’t trust your best players to act like adults in a professional game then it’s a pretty major condemnation of what’s happening in the locker room.

We’ve seen teams be able to find success even when their star players didn’t get along with one another (see Shaq and Kobe and many others).  But this relationship between Kamara and Higuain seems to be toxic beyond repair at this point and time.  At the very least, it’s going to take an intervention from Dr. Phil or Brother Love or somebody who can get these two on the same page.  That may be impossible though, and it may cost the Crew their chance at returning to MLS Cup and keeping in tact a nucleus that looked set to contend for a long time.  Right now it seems like the town of Columbus ain’t big enough for the Crew’s two designated players.