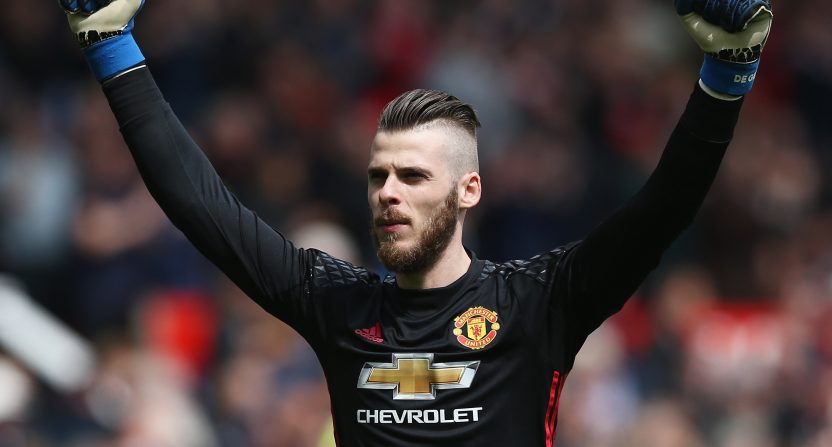 The NHL and NBA playoffs are in full swing, the Kentucky Derby is this Saturday, and there are rumors swirling around that David de Gea will be leaving Manchester United to go to Real Madrid. Those are the telltale signs that May has begun.

The De Gea to Real Madrid cloud has hung over Manchester United fans ever since he nearly completed the move to the Bernabeu in the summer of 2015 save for a faulty fax machine, or so we’ve been led to believe.

The truth is De Gea was likely never going to sign with Real Madrid that summer, and he probably isn’t going to be signing with them this summer either.

Two years ago, it seemed that everyone in the world save for two people were convinced De Gea was going to be leaving Manchester in favor of returning to Madrid. Those two people were myself and apparently David de Gea.

Back then, the entire media was convinced that De Gea wanted out of Manchester but there were two things that were suspiciously missing from the entire saga. The first was that while Manchester United were acting like De Gea was going to leave, they weren’t seriously searching for his replacement. The second is that throughout the entire summer-long ordeal, David de Gea never actually said he wanted to go back to Madrid.

Why wouldn’t he say something if he wanted to leave. The answer is simple. He probably didn’t want to leave, but he couldn’t say that.

If you remember, throughout the entire summer of 2015, the person who spoke the loudest about De Gea returning to Madrid was De Gea’s girlfriend. She was the one who wanted him to come home. Well, you know the phrase “happy wife equals happy life,” how could De Gea say “actually honey I think I’d rather stay in rainy Manchester.” He couldn’t, and therefore he let things run its natural course. Manchester United played it perfectly. Then United manager Louis van Gaal dropped him for every game that came before the transfer window closed. United waited until the 11th hour of the transfer window to “complete” the deal with Real Madrid, only to it fall through and blame a fax machine.

Van Gaal knew what he was doing. He had the trump card that De Gea wanted to be Spain’s no. 1 goalkeeper for the upcoming Euros, and the only way that could happen was if he was his clubs number 1 goalkeeper. The only way that would happen is if he signed a contract extension at United. United acted like De Gea’s mind was twisted right up until he signed a new deal as soon as the transfer window shut. Both sides got what they wanted in the deal. United kept their goalkeeper and De Gea was able to save face with his girlfriend.

This time around it’s more of the same. Once again while all the rumors are swirling there’s one thing missing. David de Gea isn’t saying anything.

The difference is, this time around there’s even more reason to question whether he wants to leave. Last time around, there was the belief that in order to be Spain’s no. 1 goalkeeper, you had to be playing for either Barcelona or Real Madrid. De Gea has already established himself as Spain’s number 1 and he did that from England.

Sure, De Gea is originally from Madrid, but he’s a product of Real’s rivals Atletico. Signing with Real Madrid wouldn’t exactly be a homecoming for him. This isn’t similar to Cesc Fabregas’s situation where he grew up at Barcelona and all of his national team friends were still playing there. Most of Real Madrid’s players don’t play for Spain. In fact, De Gea’s best friend on the national team is Juan Mata, who just happens to play for Manchester United.

De Gea is a smart person. He knows he’s one of the most beloved players at Manchester United. When the whole saga ended in 2015 and he returned to Old Trafford, there was not a single fan that booed him. At Real Madrid, if you have a bad half, the fans can turn on you. He knows that.

There are certainly a lot of reasons for a Spanish player to want to play for Real Madrid but let’s bend reality and make it seem like he would be swimming in trophies should he sign for Los Blancos. And if it’s about money, Manchester United can offer him just as much.

You may be buying into the rumors that De Gea truly wants to return to Real. If you were a betting man you may even bet on it.