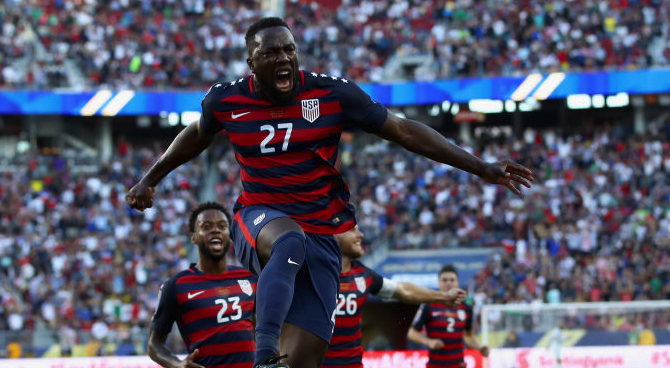 At this point, it’s safe to say that there are two types of USMNT fans: Those who love striker Jozy Altidore and those who despise him with no in-between. The ones who love him will point to all the goals he’s scored for the national team, 39 of them, including goals in the 2017 Gold Cup semifinal and final to help the U.S. lift the trophy, which puts him third all-time on the USMNT goal scoring charts trailing only Landon Donovan and Clint Dempsey.

It’s no accident that Altidore is the third-highest scorer in USMNT history, and yet there is still a large and vocal faction of the fanbase that doesn’t like him. That begs the question, does Altidore deserve the hate he’s given?

This is somehow both a difficult and not so difficult question.

There’s no denying that Altidore is a good soccer player. You don’t get the level he got to, playing for the national team, two different stints in the English Premier League, a 30-goal season in Holland, and earning an MLS DP contract by accident. However, you can argue that if the United States wants to achieve their goals of competing internationally with the world’s best, then Altidore is holding them back. In other words, Altidore just isn’t good enough to play at the level the U.S. wants to be.

Altidore’s fans will be quick to point out that 39 international goals doesn’t happen by accident. However, it should also be noted that of those 39 goals, only four of them (10%) have come in competitive matches outside of the United States. One of those was at the 2009 Confederations Cup when Altidore was an up-and-coming star.

By comparison, 13 of Dempsey’s 57 international goals (23%) have come in competitive matches outside of the United States. Of the three away World Cup qualifying goals, one of them was against St. Vincent and the Grenadines — from the penalty spot — hardly giving Altidore a reputation as a helpful contributor in those tough away CONCACAF matches. The idea that Altidore is a big physical striker that’s necessary in these away games is a myth.

The Jozy Altidore debate sparked up again in July, when Altidore scored two crucial goals to help the U.S. win their sixth Gold Cup. Fans of the striker were quick to flaunt how great the striker was all over social media.

But hold on. When you look back at the goals, you’ll realize they were peak Altidore. One was a first-touch finish on a beautiful ball from Clint Dempsey with the other coming on a wonderful free kick. Notice how on each goal he only took one touch.

Jozy Altidore can smash a ball with the best of them. No one will ever deny that. It’s all the following touches that drive fans insane.

Back in 2014, when NBC took over the Premier League TV rights, Roger Bennett of the Men in Blazers, said Altidore had the worst second touch in all of football. It’s a very accurate statement, if you need someone to run onto and smash a ball or redirect one into the net, there are few that do it better than Altidore.

Why Bruce Arena is in love with Jozy Altidore … I guess he wants a hold-up style striker. We'll see. Goalless in 10 games.

Finishing in the box is a great trait for a striker, but in this day and age, even strikers need to be able to contribute in other areas of the field. When you think about what Altidore does outside of the box, the only thing he’s praised for is his hold up play.

And there are those dreaded words, hold up play. If you ask someone in the anti-Altidore camp about hold up play you might cause them to have an aneurysm. But the truth is, if you’re talking about a striker’s hold up play, it’s because there isn’t much else to talk about. Wayne Rooney, Zlatan Ibrahimovic, and even Clint Dempsey when he’s asked to, all have great hold up play but when people talk about them they focus on the goals, because they score them in bunches.

Altidore is hardly the only poacher to not contribute much outside of the box. Javier Hernandez is a poor dribbler, poor passer and is a terrible crosser. His skill set is he finds ways to put the ball in the net and doesn’t do much else. This translated well in his career at Manchester United because they were able to call on him late in matches as a super sub. And if they decided to start him, it was fine because they had the talent of Wayne Rooney, Ryan Giggs, and Paul Scholes to make up for Hernandez. The same thing happened at Real Madrid with Gareth Bale and Cristiano Ronaldo.

The USMNT doesn’t have the luxury of world class players. If they want to be successful, they need all 10 outfield players contributing all over the field. Perhaps the most frustrating part of all is that Altidore is really only effective in a two-striker system, a system isn’t exactly built to play anymore.

At the end of the day, there’s certainly a value to Jozy Altidore, but these days his best use for the U.S. may be coming off the bench if they’re chasing a late goal. With the way the rest of the team is made up, his skill set just doesn’t match the rest of a team that will now be, and should be, built around Christian Pulisic.

Altidore will likely continue to struggle in away CONCACAF matches, history suggests as much. But that doesn’t mean he deserves hate for that. That’s on the manager, in this case Bruce Arena and whoever succeeds him, to realize and use Altidore that will help the team. If they don’t, Altidore will continue to get hated on, but that hate should really be directed elsewhere.