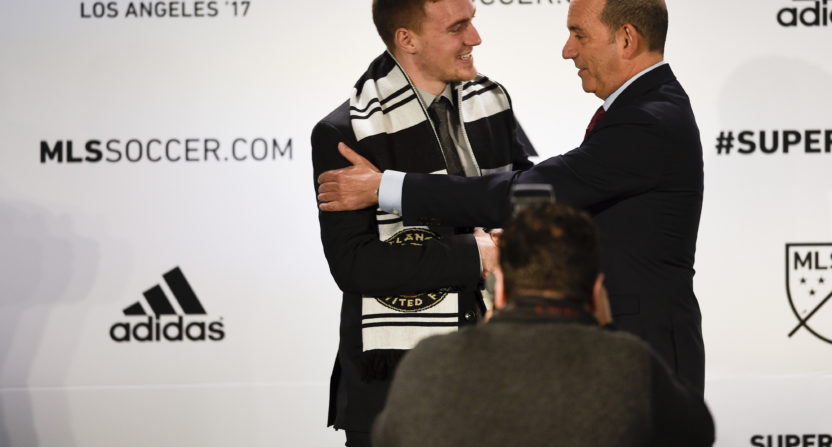 Every so often, you may find yourself caught up in a tweet thread on how drafts in sports are outdated and shouldn’t exist. Many of these discussions have merit, but at some point turn into a shouting match and miss the larger point on why North American sports are married to a draft system for younger players.

The NFL, NBA, NHL and, to a lesser extent, MLB will never get rid of their drafts for a litany of reasons. But in Major League Soccer, the talk of eliminating their SuperDraft certainly has merit in ways the discussion doesn’t possess for those other sports and leagues. MLS doesn’t seem willing to axe the SuperDraft at any point soon, but should they seriously consider it?

MLS’ SuperDraft was actually created in 2000 as a combination of the college draft — which went exactly as you’d think it would — and the supplemental draft, which is how MLS clubs acquired players otherwise. It’s functioned akin to every draft from every other sport since, but its significance is declining rapidly as MLS clubs are more plugged into the global transfer market, and MLS academies and homegrown player rules eventually ensnare the best college talent anyway.

Certainly, MLS clubs can exploit the draft to find players that will have major impacts on their squads. Recent number one picks include Cyle Larin, Andre Blake and Jack Harrison; all players who have become stars in the league. But usually, most MLS draft picks become decent squad players at best, and at worst, they end up milling around in USL. In fact, there were a number of 2017 first-round picks who were already cut from the teams that drafted them, and the few who weren’t signed pre-contracts with the league, and those players are vastly outnumbered by those whose draft status ends up being a glorified tryout offer.

That is just the first round. MLS’ SuperDraft has four rounds and now 92 picks to be made with the addition of LAFC to the league, which teams later on down the line can pass on if they want to. If draft picks more often than not do not become impact players, many of them get cut after a year or two with their teams, and the rest either fall out of the sport or ply their trade in USL or abroad in lesser leagues, then why continue the draft in its current bloated form? Does MLS really need the draft now as academies and homegrown players become more critical than the draft itself?

Part of why the draft still exists is because the United States is a big country, and the 23 current MLS clubs can’t find all of the talent around the college game and snap them up as homegrown players, even though those rules are hilariously fungible. But most players don’t sign contracts with the league before the draft anyway. Allowing them to sign freely with anyone isn’t necessarily going to hurt the competitive balance within the league when many of the best young players in the country are snapped up via homegrown deals. And for those that do, they can simply be put through the allocation order, which the worst teams from the year prior are at the top of anyway.

There are 92 picks in this year’s MLS SuperDraft, with 220 players eligible, and it’s a guarantee that some of those picks later down the line will be passed on. There’s certainly no reason for a four-round draft at this point, and even two is pushing it. Giving each club two draft picks like the NBA would make the draft become more meaningful, since only two rounds of the draft are held at the United Soccer Coaches Convention anyway. Many of these players have a future in USL at best, and for the lucky few that break into MLS, they are reserves, paid the MLS minimum salary (which is $54,500 in 2018), and end up being cut after a season or two anyway.

That isn’t to say that the draft is irrelevant or meaningless, because there have been impact players taken in the draft every year, but those numbers are getting fewer and fewer as the years go on. The best way to build teams in all of the major North American leagues is through their drafts. But in soccer, particularly MLS, the draft is maybe the fourth-most influential method of team building. There are always players who exceed their draft position, like 2015 fourth-round pick Dominique Badji for the Rapids. But since so many teams have other, better ways to acquire players, the draft’s usefulness continues to drop every year.

As recently as 2013, there were only two rounds to the draft, which makes infinitely more sense even now as the league’s rapid expansion continues unchecked. There will always be college players unattached to any individual team who the draft immensely benefits, but that number is getting smaller and smaller. There are also easy reforms that can be made to make the draft more efficient, less bloated and more impactful, and there are scenarios in which the draft can be eliminated and the league wouldn’t be losing much at all.

Discussions about the NBA or other leagues eliminating their drafts have always been a bit fanciful. But for MLS, eliminating the draft might benefit everyone, or at the very least, reforming it would certainly benefit the league, the teams, and the players involved.