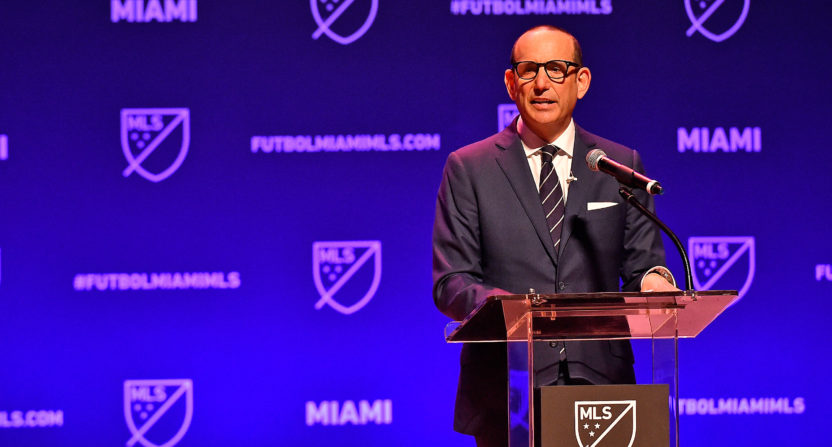 Anthony Precourt’s attempt to relocate the Columbus Crew to Austin, Texas has brought much-deserved scorn and shame to Major League Soccer through the #SavetheCrew saga. Somehow, it seems as if Precourt’s stumbling and bumbling in Austin, Texas may actually move towards the finish line in an upcoming August City Council vote. Precourt and Austin revealed a term sheet as a prelude to a stadium deal in the late hours of Friday night, which was curious considering Friday night news dumps are usually reserved for bad news instead of celebrating major progress.

However, at the same time, MLS Commissioner Don Garber gave temporary hope to Crew fans in Columbus that there could yet be a way for Columbus to keep their team and Austin to get theirs in a surprising twist. Alas, that optimism was relatively fleeting. Unfortunately, further comments from Garber and the league have only served to muddy the waters even more.

Transparency is seemingly the biggest enemy of MLS and that’s been no different throughout the #SavetheCrew story. The league has justified standing behind Precourt because of vague “business metrics” that have still never been revealed or brought to light almost a full year after the announced intentions to move the team. Garber has never answered as to how Austin can jump other expansion cities or why they are able to avoid paying a $150 million expansion fee. The league has not been held to account as to the secret “Austin Clause” and how or why it was instituted for Precourt and what it might mean if the potential relocation falls through. And the league still repeatedly refers to team owners while also arguing in court that Anthony Precourt doesn’t actually own the Crew because they are only a theoretical entity that only exists in the state of Delaware.

But it’s the double speak of Garber and MLS executives this week while celebrating MLS All-Star festivities that take the obsfucation and hypocrisy to dizzying new heights.

While speaking about the Crew controversy, Garber gave a mind-blowing monologue that defies belief. In this single statement are multiple points of contention that expose a league that makes it up as it goes along depending on the hour of the day.

“We’re not racing against any deadlines”

Garber says this about what’s happening in Austin at the same time the lobbyist endorsed by MLS to move the Columbus Crew, Richard Suttle, says “August 9 is a critical date for action on the decision related to McKalla Place.” Then again, you could also question how sympathetic Garber is to Columbus and Crew fans when MLS is currently co-defendants with Precourt Sports Ventures in a lawsuit to try and prevent the team moving.

“We want our stadiums to be downtown.”

For the longest time, MLS has stressed that in its latest expansion rounds that stadiums must be built in a downtown area to ensure long-term success and viability. Except, of course, when they don’t.

The downtown stadium standard has been used as a point against the Columbus Crew and their stadium at the Ohio State Fairgrounds off I-71. But the same standard clearly does not apply to Austin. (Or in Nashville where their new MLS stadium is going to be built, like Columbus, at their fairgrounds.) After Austin balked at Precourt’s preferred downtown park destination, MLS/PSV are trying to get a stadium built at McKalla Place, which is more than twice as far from downtown as Mapfre Stadium is in Columbus. How can Garber actually maintain that a downtown stadium is important when Precourt is attempting to get tax-free land on an old chemical waste dump more than 10 miles from city hall?

Unless you count Precourt’s bachelor party in Austin, he is not going to be a local owner. He’s from California. Columbus has had to suffer through his absentee ownership for years and the franchise and the stadium have literally crumbled under his leadership. On the other hand, local ownership in Austin is seeking to establish a USL team at a stadium that’s already built in place. Why would Garber/MLS not endorse the already successful USL -> MLS pathway for local ownership in Austin if the league wants a team in the Texas capital that badly?

MLS is changing the rules of the game for however they see fit to benefit whoever they see fit whenever they see fit. Columbus Partnership CEO Alex Fischer has been leading the effort of the local business community to save the Crew and he called Garber to task over the commissioner’s duplicity. He also took a dig at Garber’s lack of engagement with the city while pointing to the ongoing conversations with deputy commissioner Mark Abbott about Columbus’ future in MLS.

Via the Columbus Dispatch:

“I find it extremely ironic that the commissioner wants a downtown stadium at the same time that the McKalla site is the equivalent of building a stadium in Buckeye Lake,” Fischer said. “I’ve got a home in Buckeye Lake and maybe we should look at putting the stadium there if that’s what they’re interested in.”

“I’m glad that Mark Abbott’s now been to Columbus in the last six weeks (and visited on) multiple occasions, and that’s more times than commissioner Garber has in the last five years,” said Fischer, who is under a non-disclosure agreement as he participates in a valuation of Crew SC. “I’m encouraged by those discussions. As MLS knows, we’re awaiting some decisions as it relates to a number of different approaches we’ve discussed before we can get into proceeding with diligence.”

Instead of attempting to clarify the situation, MLS responded just like you would expect – with petulance. Abbott responded to Fischer’s comments by lining up behind Garber and threatening to take his ball and go home.

“Commissioner Garber has been in Columbus multiple times in an effort to help the Crew address the challenges it faces and he doesn’t feel the need to call Alex every time he’s in town,” Abbott told The Dispatch. “My deeper concern is that Alex’s comments seem to be part of a pattern of unnecessary, unproductive and ad hominem attacks against the commissioner, (Crew investor-operator) Anthony Precourt and the league.

“It’s certainly a strange way to demonstrate an interest in working with us.”

After these public comments from MLS, how can Columbus business leaders and city leaders believe for one second that MLS would actually work with them in good faith? According to Garber’s own logic, MLS should mandate the sale of the Columbus Crew to the Columbus Partnership and build a downtown stadium. If that’s really the solution MLS wants, as Garber says, then it’s simple – the Crew can be saved tomorrow, Precourt can get a coupon for free queso in Austin as a parting gift, and MLS can finally put this behind them.

But at no step has MLS actually proven those words to actually be true. Instead, they’ve held Columbus and Austin to different standards while supporting Precourt’s relocation attempt in opposition to seemingly every one of their stated goals. How can any fan take anything MLS says at face value after what we have seen and heard the last nine months? At this point the only thing fans can trust is that the game is rigged. They can only hope that they’re not the next Columbus and it’s not rigged against them.