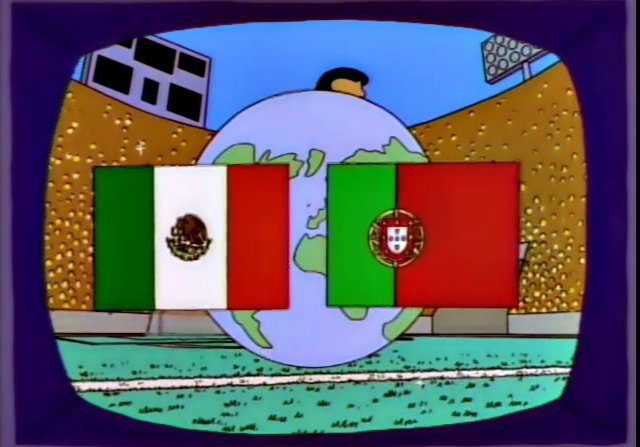 The Simpsons has had the uncanny ability to correctly predict things over the past 30 years. Whether it was Donald Trump being President of the United States or the Stanley Cup being in Las Vegas or even Disney buying Fox, The Simpsons is pretty good at predicting things.

Because of this, many sites have prematurely acted like they magically discovered a prophecy not unlike Tom Hanks in The Da Vinci Code.

The 1997 episode titled “The Cartridge Family” dealt with the townspeople of Springfield attending a soccer game between Mexico and Portugal. And after everyone in the stands was bored, they had a good ol’ fashioned soccer riot that spilled out into the town.

Because of this, many places throughout the internet have posted very similar articles. It’s usually titled something like “Did The Simpsons predict the 2018 World Cup final?” The BBC, Washington Post, USA Today, Hollywood Reporter, Yahoo, AV Club, SB Nation, Billboard, FTW, you get the point, a lot of sites have done this the past few days.

I’m here to say that it was a stretch to assume this would happen in the first place, but now it’s definitely not happening. Based on their positioning in the knockout round, the only scenario where these two teams can meet is in the semifinal.

I totally get the need for content. The summer isn’t exactly a time of the year where the news is flowing so we need to get creative. Everyone does it on a slow news day. It’s why I’m writing this. But maybe we should’ve pumped the brakes and just waited until the end of the group stage instead of trying to be first on something that was extremely unlikely going to happen.

Now if you’ll excuse me, I’m off to write my piece wondering if The Simpsons correctly predicted the 2022 World Cup Final. Hey, it could happen.