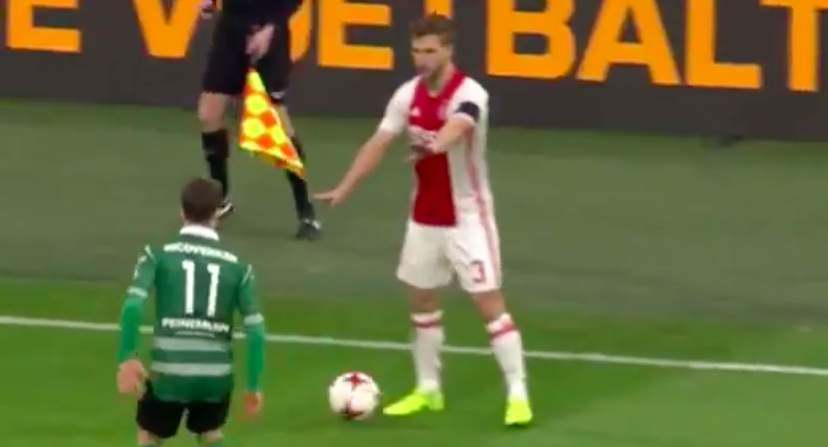 Everyone knows what you’re supposed to do when a soccer player goes down looking like they’ve succumbed to an injury. (A real one and not the one where someone flops on the ground after having the wind brush past their face.) Whether you have the ball and it’s your teammate or if it’s a player on the defending team, you’re supposed to play the ball out so that the game can stop and the player can receive medical attention. It’s an “unwritten rule” of soccer one could suppose and widely accepted as the sporting thing to do.

Defender Joel Veltman of Dutch soccer club Ajax has no use for your unwritten rules.

In a game this weekend against Sparta Rotterdam, Veltman used his own teammate going down to try to trick the opposition and gain a competitive advantage. After Bertrand Traore went down in a tackle, Veltman stopped and put his hands up like he was going to play the ball out or take the free kick. When the Rotterdam defender turns his head, Veltman then plays on and whips in a cross against an unsuspecting defense.

While I’m all for trying to do everything you can to win the game and Veltman didn’t break any rules or anything, that probably does cross every conceivable line of poor sportsmanship. Even though Veltman’s trickery didn’t result in a goal, Ajax still won the game 2-0. Veltman defended his cheekiness after the game saying that it was “not the most beautiful thing to do” and that everyone should just have a laugh about it.

“I was just being clever,” Veltman told Metro. “Bertrand went down and I thought to myself ‘I am going to use this to my advantage’. I pretended to kick the ball out of play, but when my opponent looked behind him, I just went past him instead.

“I know that it was perhaps not the most beautiful thing to do, but it was just something clever, nothing more. I can have a good laugh about it.

“My team-mates told me in the dressing room that they would have kicked me hard had I pulled off something like this against one of them. What would I have done had my cross resulted in a goal? A goal is a goal!

“I think people are exaggerating all this a bit. It was not like I found myself one-on-one with the goalkeeper after it.

It’s probably a good idea for Veltman not to try this one again… not only because it probably wouldn’t work a second time, but if he dared to try to pull it off once more his shins would probably be have the biggest bullseyes on them in Holland.