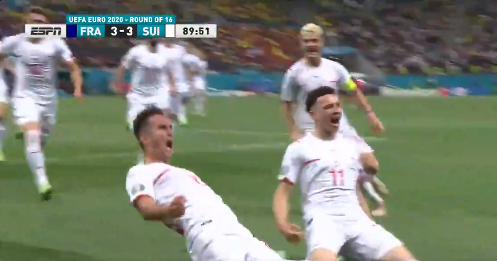 Euro 2020 (yes, it’s 2021, but tell UEFA that) has been a wild ride so far, and that was particularly true in the Round of 16 matches Monday. Spain beat Croatia 5-3 after extra time, while Switzerland (seen above celebrating a 3-3 equalizer) bested France 3-3 (5-4 on penalties). Those results meant that both the 2018 World Cup winner (France) and runner-up (Croatia) are now gone, joining 2016 Euro winner Portugal (France was the runner-up that year), who fell 1-0 to Belgium Sunday. But Monday’s results were particularly remarkable for the amount of goals scored on all sides, which made some history:

There have only been 3 EURO Knockout stage games in history in which both teams scored 3 goals.

Two of them have come TODAY.

France and Switzerland are tied 3-3 after regulation. Catch extra time on ESPN pic.twitter.com/ebi4IOI3Iz

The only previous match to hit those heights was the France-Yugoslavia semifinal in 1960, which Yugoslavia won 5-4. Interestingly enough, that tournament had a similar setup to this year’s pan-European approach, with early matches played all over the place (17 teams entered, and it was home-and-home series until the final four, which was all played in France). And the both-teams scoring from that semifinal had never been equaled until Monday. Monday was also notable for the surprising regulation-time comebacks, even if Croatia’s wound up as an extra-time loss:

That means that the likelihood of what has transpired today (both teams not winning in 90 minutes) was .0064%. pic.twitter.com/Ui8DFS7hxj

Here are some of the best goals from both matches:

Spain turn it around on Croatia pic.twitter.com/GzTdtcqqpS

PASALIC TIES IT FOR CROATIA IN THE 93RD MINUTE 🤯🤯

THIS GAME IS OUT OF CONTROL 🚀 pic.twitter.com/LQ9iAMWy75

Hang this Benzema touch in the Louvre 🖼 pic.twitter.com/MDuPiTim6z

Pogba with a perfect strike to the upper 90 😱 pic.twitter.com/TdzrfC20yb

There are still two Round of 16 matches left Tuesday: England-Germany (noon Eastern) and Sweden-Ukraine (3 p.m. Eastern). We’ll see if they can live up to the excitement we saw Monday.

[ESPN Stats and Info on Twitter; screengrab via @ESPNFC]