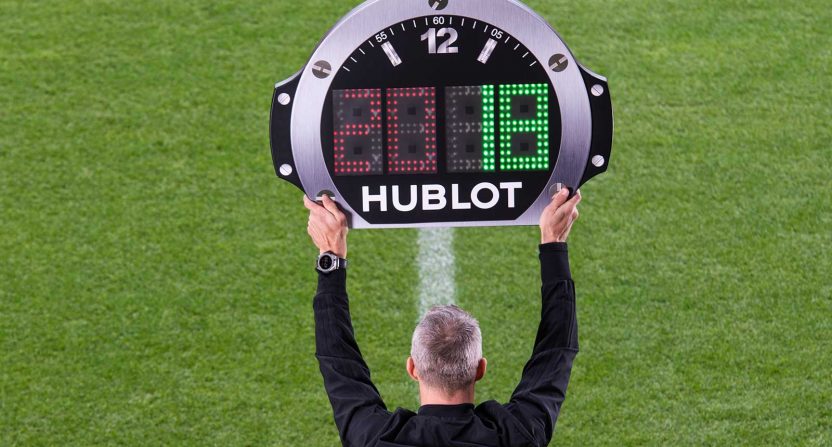 After needing to delay things for a few months due to the COVID-19 pandemic, club soccer leagues came back to play over the past month or so and things looked different. The obvious visual difference was a lack of fans in stadiums but leagues also instituted hydration breaks and the ability to have five substitutes per game.

As the interrupted 2019-20 season wraps up throughout the world, organizers have eyes set on next season. And even though the pandemic has weakened in other parts of the world, everything still isn’t to 100 percent and some things will remain in place longer than expected.

One thing that is going to be extended is the five substitutes per game rule. The IFAB approved a measure that extends the rule through the 2020-21 season but will leave it up to each league if they want to keep it at five or revert back to the traditional three-sub setup. Just like in this season, even though a team can make five substitutes, they only have three opportunities (plus halftime) to make subs. This is done to prevent a manager from wasting time by making one sub after another to preserve a lead.

Despite this rule only being set for next season and it being optional for leagues, reaction hasn’t been positive. Most reactions have ranged from being annoyed to believing that this will ruin soccer. Despite this being an unpopular move, extending the five-sub rule is necessary right now.

The main reason the IFAB made the decision they made was due to “player welfare.” Because we’re two months past the expected end to the season, players won’t have much of an offseason between 2019-20 and 2020-21 if they want to end next season anywhere close to on schedule. This wouldn’t be as bad had every soccer governing body not stuffed every possible opening with a game, leaving zero margin for error when rescheduling.

The only thing organizers can do is to stuff the same number of games into a season that may be shortened by a month or two on the calendar from a schedule that couldn’t withstand much more stuffing. In England, there’s the Premier League, Champions League/Europa League/Europa Conference League (in 2021), FA Cup, and EFL Cup.

Players aren’t robots. Yes, these are some of the finest tuned athletes in the world but they do break down. If you’re riding a horse and don’t give it a break, you can only ride the horse for so long until it passes out and dies. While the players probably won’t die, playing these games one right after the other will raise the risk on common injuries to the hamstring, thigh, calf, and ankle that will keep a player out for weeks or months at a time.

An extra couple subs per game can be a way to limit minutes for more players, especially in blowout games. If you’re winning or losing 4-0, just put in whatever five people you have from the bench and give a break to as many starters as you can. In addition, having another couple subs per game can provide more appearances for younger players looking to breakthrough the senior squad. We constantly complain about young players going on loan every year and they’re never given a chance. Maybe this is that chance. Maybe teams will no longer treat their academies as a farm to sell people for profit and maybe a player who grows up playing for a team as a youth actually plays for that team when they’re an adult.

There are legit concerns with the possibility of making five subs per game the standard. The biggest concern is it will further separate the division among the top established teams and the rest. Big teams who are normally at the top have the financial means to sign talented bench players who are talented enough to start elsewhere. Manchester City is so stacked, their second XI could probably finish top six in the Premier League. Midtable and lower table teams, they’re going to see this as a bigger challenge because they might have had the means to get 11 talented players but now they’ll need more because the bench will be more important. Bigger teams already have players capable of starting elsewhere playing on their team so it’s not like anything will change. Christian Pulisic might be able to start every game for West Ham but there’s a reason why he chose Chelsea. And that was before anyone was aware of a team having five subs.

Will this five-sub rule ruin soccer? No, that’s just hyperbole. Years ago, there were no subs and if someone got injured in a game, you were down a man the rest of the game. At some point, teams were able to have one sub. After that, teams were able to have three subs, the standard most of us have been used to. And just a few years ago, teams were able to have a fourth sub in extra time of a tournament. All those times of change, a vocal group of people thought it was the worst thing ever and that it was a nail in the coffin for soccer. Having five subs, if it’s decided to be a thing after the 2020-21 season, will make for strategy changes but we can say the same thing about every rule change. At least this rule might keep players healthier and can extend their career.