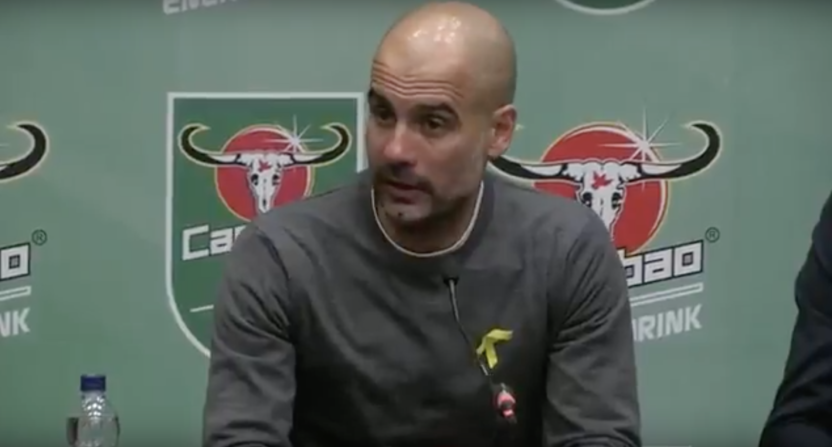 Pep Guardiola is Catalan through and through. The former Barcelona player and manager may have left Catalonia and currently manages in England but he hasn’t let that keep him from supporting Catalan independence from Spain.

In support, the Manchester City manager started wearing a yellow ribbon last week in the FA Cup against Wigan. The ribbon was in remembrance of Catalan separatists who are currently in prison by the Spanish government for wanting to be independent.

Right now, Guardiola has been charged by the FA for the yellow ribbon as it is a political statement. Guardiola didn’t let the charge affect him as he wore a yellow ribbon in Man City’s Carabao Cup win against Arsenal. Guardiola laid it out on the line in the post match press conference and in his view, the cause is much more important than the punishment and will keep wearing the ribbon, even though Guardiola could face more severe punishment for each violation.

Transcription from The Independent:

“They know I will wear it always. I can wear it somewhere else. UEFA have another opinion, they say you can wear it as long as it’s with respect, here it’s different apparently.”

“I accept the fine if I broke the rules. I am a human being and this is for humanity and there are four guys in prison and other guys, who will be in jail, they don’t have weapons, just balls in the ballot, that’s why. I said it’s always with me and it always will be until the last – it’s not about politics, it’s about democracy – the people who didn’t do anything apart from having another opinion. Hopefully in the future, the state can help these guys out of jail. In the future we can be there if they don’t respect what we have done.”

“Before a manager, I’m a human a person, everyone in England knows what it means, you did the Brexit, you allowed Scotland to make a referendum and the people voted. That’s what these guys asked and they are in jail – 145 days – everyone is innocent until the judge proves you are guilty, they are there. Try to be out with their families and, after, the judge can decide. Everyone will listen to their opinions, but they are accused of a very strong thing. They don’t have weapons, just votes, they didn’t break anything. That’s why I appreciate the fans for City fans. I will accept whatever they decide about my behavior, it’s not a lack of respect, it’s being part of humanity.”

While it’s not exactly the same thing, the FA of all associations should be sympathetic to Guardiola for calling attention to something he is passionate in. Every November, all English teams and players wear poppy flowers for Remembrance Day to honor those who lost their lives in World War I and the Royal British Legion sell these poppies to raise money for charity.

But just five months ago, FIFA viewed poppies as a political statement and were threatening to punish the FA for having their players wear armbands with the poppy on them for England’s friendly against Germany that happened the day before Remembrance Day. Common sense prevailed and FIFA allowed England to wear the armbands as long as their opponents gave permission, which Germany did.

The same common sense should be applied here. While Catalan independence is political and remembering deceased soldiers isn’t as much, both instances were viewed by organizations as political statements and those who wanted to make those statements viewed the punishment as being worth it.

While some may say allowing Guardiola to wear a yellow ribbon would be a slippery slope, look at how the FA is seen in this situation. The FA is being portrayed as an organization who is unsympathetic to the actions of a Premier League manager trying to shine a light on a serious situation. And all of a sudden, this is now a problem even though they were on the other side less than six months ago.

Just like FIFA knowing they couldn’t do anything once the FA was willing to go through with wearing poppies despite the punishment, the FA can’t do anything with Pep Guardiola about wearing a yellow ribbon. A fine may not be as big a deal but Guardiola seems willing to keep going even if he gets a touchline ban for wearing a yellow ribbon. If it comes to that, the FA is going to look like the bad guys, not Guardiola. I can’t believe I’m saying this but the FA should be more like FIFA and have some common sense to solve this situation because they will look worse and worse the harder they fight against this.