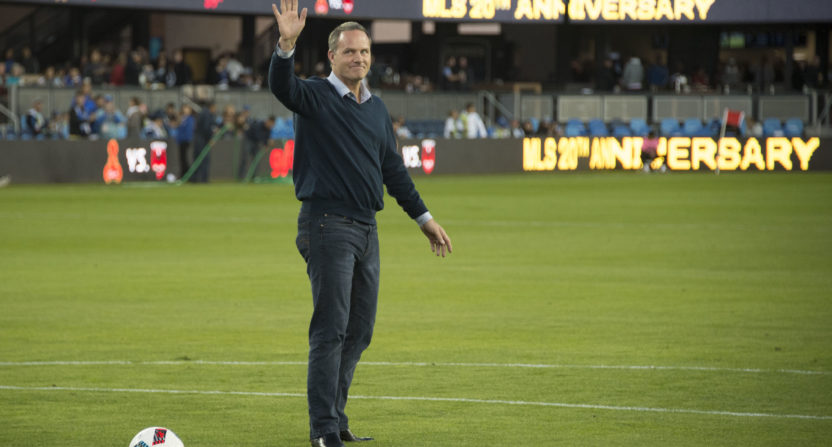 The race for US Soccer President has seemingly taken forever and there’s still over a month to go until the actual vote. So many things have gone on from conflicts of interest to sexism among state soccer organization leaders to the heads of US Soccer not endorsing candidates but “endorsing” candidates, that it’s kind of become a microcosm of how dirty a government election is and we as the public is getting a glimpse of how the sausage is made within the higher levels of US Soccer.

At least in the US Presidential election, we got to submit our vote on who we felt was the better, or the lesser of two evils, candidate. We’re not getting that in the US Soccer version. Yes, a small percentage of fans do get a vote and that is more than what other soccer federations around the world do but it is a small percentage compared to the rest of the voting sectors.

So while the majority of the public isn’t voting and we’re not going to get much info from actual voters on who they’re voting for, we have to resort to the next best thing. Twitter user @phat7deuce, also known as Mike Pendleton of FiftyFiveOne put out a survey asking soccer fans who they would vote for and the issues that was most important to them.

A total of 1,385 people voted and 46.9% of participants voted for Eric Wynalda to be US Soccer President. Kyle Martino placed second with 29.2% while Hope Solo (6.2%) edged out Kathy Carter (5.6%) for third place. This is obviously in no way scientific with people volunteering to participate but it’s the best look we have so far as to who the fans are backing. It is also important to note that in the actual presidential vote, the winner must have 50% plus one vote or else there’s a re-vote so even in this scenario, Wynalda wouldn’t win and there would need to be a re-vote.

Pendleton went deeper separating support by league and asked what issues fans felt were most important to them. Youth development wound up being the runaway winner with 69.2% of people listing that as one of their top five important issues. And then USMNT performance, “pay-to-play” youth soccer, improving coaching and promotion/relegation rounded out the top five.

Pendleton organized the data into two PDF’s that you can see here. Part One is about who people would vote for as well as their satisfaction/dissatisfaction of various sectors within US Soccer. Part Two separates the info by a voters favorite league and show the top three vote getters in each as well as the five most important issues for those fans.

You can seemingly get a sense of how people are voting based on the league they support. By being a big proponent of pro-rel, Wynalda gets most support from people in all the lower leagues, European leagues/Liga MX as well as the USMNT. It’s not a coincidence that, in all those sections, pro/rel was identified as an important issue.

Solo dominated among NWSL and USWNT fans. Among the many issues, things like equal pay and equality between the national teams hasn’t been focused on as much as other issues. So when Solo came in and made that as a focus, in addition to having been on the players union who was negotiating for an improved CBA for the USWNT, people looked to support her.

Martino won out among MLS fans and that seemingly makes sense since he is looking more toward youth development and coaching. Where Wynalda’s supporters largely want pro-rel and want it now, Martino’s supporters seem to vary from feeling pro-rel is unnecessary to it being something nice to have eventually but it’s not the right time to do it to feeling that there are more important issues that need to be fixed before bringing in pro-rel.

One noticeable person absent is Kathy Carter who has had the “unofficial” endorsement of current USSF President Sunil Gulati and MLS Commissioner Don Garber. Carter was the former President of Soccer United Marketing and would seem to have a decent chance at winning with two of the most powerful people in US Soccer backing her behind the scenes. While being SUM President would seemingly make her a suitable candidate, her close connection to Gulati and Garber, two people largely hated by the soccer public in addition to the seemingly private way they have been supporting her, doesn’t bode well for Carter in public opinion.

Definitely check out the info listed here. At just over a month away from the election, this is probably going to be the most comprehensive poll among soccer fans for this election. And while the vast majority of fans aren’t voting in the actual election, their voice should be heard and should have some weight.

Quite honestly, if it wasn’t for fans being overwhelmingly vocal in their disapproval of Sunil Gulati, he would probably have run for re-election, likely win and nothing changes within US Soccer. You may not like every candidate in this election but must admit that it was the fans who caused this to start rolling and at least give the chance of change taking place. That alone is worth getting a sense of who the fans want as USSF President, even if there’s a chance it may not be a true sample size.