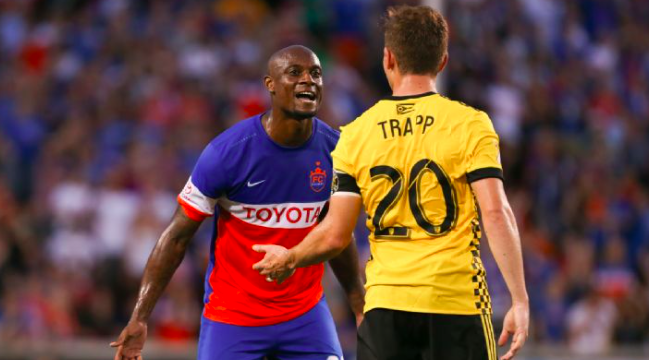 Imagine a scenario where Ohio State fans would make the trip up north to Ann Arbor, Michigan to show support for the Wolverines. Or Bears and Packers fans uniting for a common purpose. Red Sox and Yankees fans standing side by side cheering the same team in the same stadium? It would take a once-in-a-lifetime circumstance to see those fanbases who are intense rivals lay aside their differences and come together.

But that’s exactly what we’ll see on Saturday June 9th when FC Cincinnati fans will make the 100 mile drive up I-71 to Mapfre Stadium to show their support for the #SavetheCrew movement and keeping the Columbus Crew in Columbus.

FCC fans have a lot to celebrate with officially being named as a new MLS franchise after being a great success playing in the USL. In case you’re wondering what the #KeepHellReal hashtag means, it pays homage to the “Hell is Real” name given to the Cincinnati-Columbus rivalry. Hell is Real owes its name to the apocalyptic apocalyptic sign along I-71 that connects the two cities and vaults it into the top five derby names in world soccer.

This is a remarkable gesture from FC Cincinnati fans to show solidarity to MLS among Ohio soccer fans. The Buckeye state is not going to settle for having one team ripped away in Columbus to be “replaced” by FC Cincinnati. If Don Garber thinks that Crew fans will suddenly become FC Cincinnati fans overnight, he is badly, badly mistaken. Of course, Garber and all of MLS has been badly mistaken throughout the entire Crew relocation debacle. Sadly, that hasn’t stopped MLS from empowering monorail salesman Anthony Precourt from bumbling his way forward through this monumental, self-inflicted PR disaster.

While outside observers might see FCC as a death knell for the Columbus Crew, it actually should be the opposite. A Crew-FCC rivalry would immediately become one of the best in MLS alongside Portland-Seattle and lift both fanbases. As such a relatively young league with so much rapid expansion, it’s hard for MLS to actually create organic rivalries that mean something. Oftentimes, MLS’s attempt to manufacture rivalries out of nothing can feel contrived. There isn’t a pre-existing Columbus-Cincinnati rivalry in professional sports, but it would certainly come naturally. (Just ask Cincinnati sports fans their thoughts on Ohio State and you’ll see why.)

What makes this support from FC Cincinnati all the more meaningful is that it’s the only home game the Crew will have on national television this year. That is astounding considering the #SavetheCrew story is the biggest story in MLS this year and the team made the conference final last year. It’s almost like MLS wants to suppress fans in Columbus! This show of support from FCC fans for what could be their biggest rival should be one of the biggest feel-good stories in sports right now. At least for anyone outside of Precourt Sports Ventures or the MLS offices.

MLS and Anthony Precourt have done everything they can to demoralize Crew fans in attempting to rip one of the league’s own founding franchises out of its city. Precourt is letting Mapfre Stadium fall apart while spending $2 million trying to astroturf in Austin. Don Garber continues to offer little more than empty words while his league funds lobbyists in Austin and MLS/PSV lawyers bash Columbus in legal briefs.

At a time when Crew fans must feel like it’s Columbus Against the World, it’s reassuring to know that even their biggest rival fanbase is willing to stand alongside them in the fight to Save the Crew.