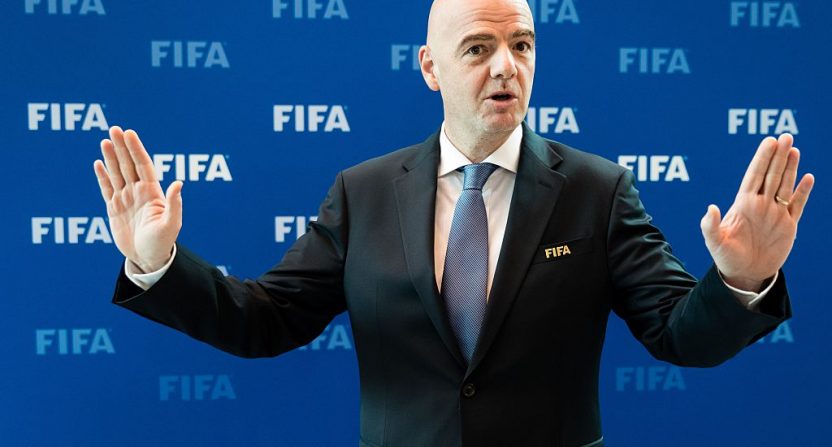 Welcome to the new FIFA, same as the old FIFA.

At least that’s what it appeared to be yesterday as FIFA recommended firing Hans-Joachim Eckert and Cornel Borbely, the two highest ranking chairmen of FIFA’s Ethics Committee and two people who had investigated and had taken down former President Sepp Blatter as well as many others within FIFA for various counts of corruption. The final vote to remove those two will take place Thursday.

Just think about this for a second. FIFA, and the president of FIFA, has the power to remove and appoint people in the Ethics Committee. Similar to President Donald Trump firing FBI Director James Comey, this power could easily be abused and set up for both president’s to abuse their power. While one is in sport and the other is in politics and both situations bring very different scenarios and consequences, they’re similar cases.

Eckert is convinced that his firing was a “political decision” and feared that the old FIFA would be back.

“The independence of ethics is very, very, very important for FIFA for the view outside, for the people who are playing football and even for the media.”
“All these people are looking to FIFA. What are they doing? Is there coming a new FIFA? Or is the old FIFA coming back again?”
Pressed on why the decision had been made to bring his tenure to an end, Eckert said: “This is a very, very good question and I think the right man would be the President [Gianni Infantino] or the people of the council to ask them why they did the decision like that.
“We definitely don’t know. I’m sorry I can’t tell you anymore.”

If Infantino wanted to sneak this past fans and the media, he sure picked the best time to do that. At the FIFA Congress, FIFA is also dealing with the United States/Mexico/Canada 2026 World Cup bid and Infantino criticized the Italian FA in how they handled Sulley Muntari’s racism claims. The Italian FA initially suspended Muntari for a game because he walked off the field and not enough fans were racist toward him to warrant walking off. After near universal backlash, the ban was rescinded. In addition to the Comey news that took over worldwide and Infantino was able to sweep this past many people.
FIFA recommended that Colombian prosecutor Maria Claudia Rojas, and Greek judge Vassilios Skouris take over at the top of the Ethics Committee. They will be watched closely and will have a difficult job because of the conflict of interest that they would be hired by the very people they would be investigating. Please tell me how that is any different from the old FIFA?