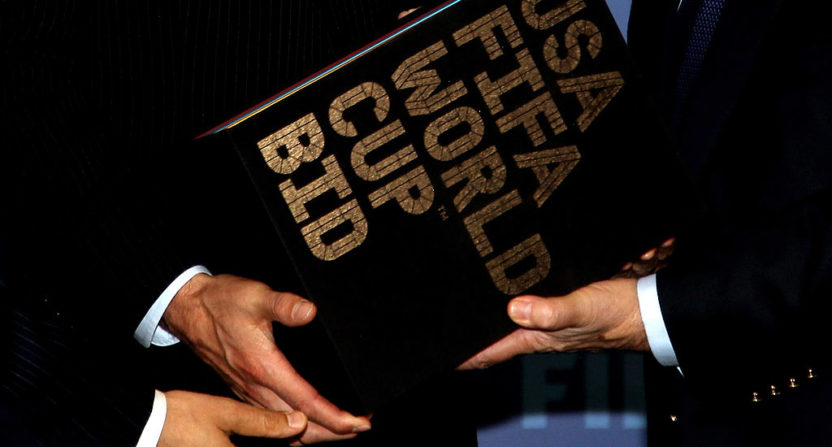 We’ve always known FIFA to be a rather corrupt organization. Just a few years ago, many FIFA execs and members were indicted for various corruption crimes. Now, after a few years and a new president and council, it seems like there is still some shadiness within what FIFA wants out of a country who’s hosting the World Cup and it’s raising red flags among potential host cities.

Vancouver based website The Breaker got ahold of FIFA’s list of requirements to nations wanting to host the World Cup. And while FIFA seems to be in the drivers seat in making demands and knowing a FIFA nation will take them up on the offer, their demands border on some of the shady things the previous leaders have been in trouble for.

theBreaker has obtained a copy of FIFA’s requirements for governments bidding for 2026. The Swiss-based organization, still reeling from the FBI’s 2015 crackdown on FIFA’s massive bribery and kickbacks, requires host governments agree to grant it huge tax breaks for an entire decade and allow it to import and export unlimited amounts of foreign currency. FIFA also requires host taxpayers pick up the full bill for safety and security and assume liability should there be any security incident of any size.

The general tax exemption, the FIFA bid manual states, “must comprise all taxes that may be applicable in the host country/host countries. The sole exception to the general tax exemption is taxation on the sale of tickets to third parties (i.e. tickets not used by FIFA, the 2026 FWC [organizing] entity, the 2026 FWC subsidiaries (if applicable) or any other FIFA subsidiary for its own purposes), but limited to VAT, sales tax or the like at a unified rate of a maximum of 10%. No other taxes may be charged on any revenues or profits generated through the sale of tickets.”

The hosting agreement also includes a clause guaranteeing the “unrestricted import and export of all foreign currencies to and from the host country/host countries by means of bank transfer, as well as the unrestricted exchange and conversion of all foreign currencies into local currency, U.S. dollars, Euros or Swiss francs, is unrestricted, not subject to any taxes in the host country, and in line with the conditions prevailing on the international foreign exchange market.”

The guarantee, however, “will by no means limit or restrict the applicability of laws and regulations in the host country/host countries to prevent money laundering.”

The first thing I thought of when I read the statement “allow [FIFA] to import and export unlimited amounts of foreign currency” I thought of money laundering. FIFA apparently thought this too and felt the “will by no means limit or restrict the applicability of laws and regulations in the host country/host countries to prevent money laundering” part as it taking care of that. I wouldn’t trust someone who said that if they had a clean history, much less an organization with a checkered past as FIFA. Though in fairness, I’m not a trusting kind of guy.

With these kinds of requirements, I can understand why Vancouver and Chicago wouldn’t be thrilled getting into that bed. Chicago wasn’t a host city in U.S. Soccer’s failed 2022 bid either so it’s not unprecedented that they aren’t part of the World Cup.

That is, if North America wins the bid in June. There is a growing chance that Morocco wins the bid on June 13 and if they do, it won’t really matter if the government’s of Canada, Mexico and the United States gives into FIFA’s demands.