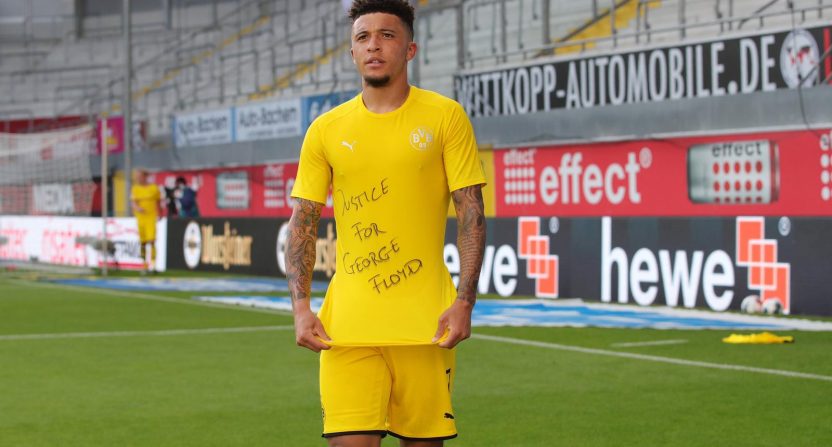 Ever since its formation, FIFA has had a rough history. In fact, they’ve been known just as much about corruption as they do soccer and they don’t have the best track record in terms of handling racism. In fact, FIFA’s perception was so bad, they spent $26 million on a propaganda movie that only made $918 on its US opening weekend.

Now in 2020, FIFA may have actually done something that didn’t cause most fans to roll their eyes at them. After a few players expressed on-field statements about the killing of George Floyd, including Americans Weston McKennie and Tyler Adams as well as star winger Jadon Sancho among many others, FIFA and UEFA both urged the German Bundesliga to not punish players for speaking out.

In a statement, FIFA President Gianni Infantino wanted leagues all around the world to apply “common sense” if any of their players make similar statements.

“For the avoidance of doubt,” Infantino said, “in a FIFA competition the recent demonstrations of players in Bundesliga matches would deserve an applause and not a punishment.”

Infantino’s comments were published in a statement by FIFA and were set to feature in a letter to all 211 member associations. The statement also urged leagues to apply “common sense and have in consideration the context surrounding the events.”

UEFA President Aleksander Ceferin echoed Infantino’s sentiments and revealed that UEFA wouldn’t punish anyone for what the Bundesliga players did.

“Football is a sport which encourages tolerance, inclusion and justice,” UEFA President Aleksander Ceferin said. “These are the same values being espoused by those showing solidarity to George Floyd.”

“If a player in our competitions were to display a message or act symbolically to ask for equality for human beings,” Ceferin said, “the circumstances around the event should be taken into account in line with UEFA’s zero tolerance against racism.”

The Bundesliga was considering punishing these players for their statements on the grounds that “any political, religious or personal slogans, statements or images” was prohibited. And while FIFA and various leagues have seemingly unfairly punished people for statements, it was done so that an organization couldn’t say they supported the message. The Bundesliga noted that they were proud of these statements but haven’t yet made a decision.

Having said that, the Bundesliga has previously shown leniency when it came to players making statements of police brutality on black people. Union Berlin’s Anthony Ujah made a statement when Eric Garner was killed by wearing a t-shirt with Garner’s name and the words “can’t breathe” and “justice.” The Bundesliga gave Ujah a warning.

That was nearly six-years ago and players are still making these statements. FIFA typically does the wrong thing but this time, good for them for reading the room. Because this probably won’t stop anytime soon.