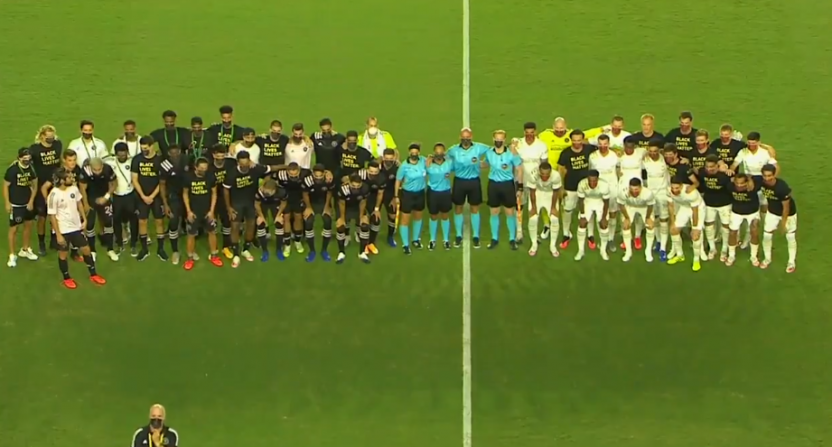 On Wednesday, the Milwaukee Bucks chose to not play Game 5 of their NBA playoff series against the Orlando Magic in wake of the Jacob Blake shooting in Kenosha, Wisconsin. This led to postponements of all NBA playoff games on Wednesday (Bucks-Magic, Houston Rockets-Oklahoma City Thunder, and Los Angeles Lakers-Portland Trail Blazers). And that was followed by the WNBA postponing its three regular-season games scheduled for Wednesday, along with three MLB games being canceled.

Well, MLS is the latest league to have postponements on Wednesday. MLS released a statement saying that all five of his remaining matches had been postponed: Atlanta United-Inter Miami, FC Dallas-Colorado Rapids, San Jose-Portland, LAFC-Real Salt Lake, and LA Galaxy-Seattle Sounders.

Not all teams voted to not play, I'm told by a league source. So amid the confusion and uncertainty, MLS decided to call off the remaining matches. https://t.co/PYIa5RfQFt

Players for Inter Milan and Atlanta United initially took the field, but decided not to play.

Inter Miami and Atlanta United stand together in solidarity as they boycott their match tonight. pic.twitter.com/AuJDSbNvQ1

And that was followed by the MLS postponing all of Wednesday night’s matches (Orlando City SC and Nashville SC did play earlier on Wednesday).

Before the announcement to postpones its matches, the MLS released the following statement:

“The entire Major League Soccer family is deeply saddened and horrified by the senseless shooting of Jacob Blake and events in Kenosha. We continue to stand with the Black community throughout our country – including our players and employees – and share in their pain, anger and frustration.

MLS unequivocally condemns racism and has always stood for equality, but we need to do more to take tangible steps to impact change. We will continue to work with our players, our clubs and the broader soccer community to harness our collective power to fight for equality and social justice.”

So, the protests and postponements are happening across the sports world, and it will be to see if the cancellations continue into Thursday.