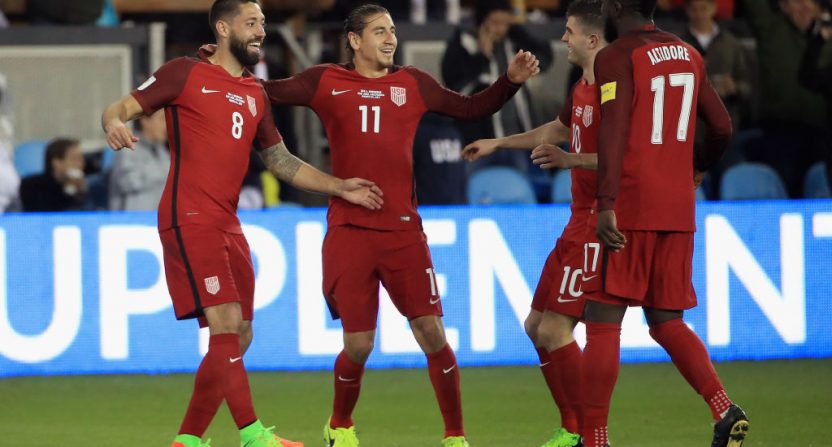 Some soccer teams around the world notice a “placebo effect” in their first match after firing their manager — playing really well and winning big but then trailing off and going back to looking like a team that had to fire their manager. Without context, it could be asserted that the Americans’ blowout victory was only another example of this. That assertion would be desperately wrong.

This game was a referendum on how good the U.S. can really be when they play their players in the correct positions, and when they have a tactical purpose and identity going into a match. Klinsmann rarely, if ever, did both of those things at one time. Arena, jumping straight from MLS, did it in one competitive game.

Arena has assembled a team that is legitimately good. A home win against Honduras may not exactly be equivalent to a victory at the Azteca, but improvement was clear, and it looked sustainable.

Here are some more thoughts:

1. Altidore, Pulisic, and Dempsey were the stars

One reason for the newfound success was playing Christian Pulisic in central attacking midfield rather on the wing. It has been his natural position for years now, and it’s where he started to play more often for Borussia Dortmund. He was on fire, scoring a goal and getting a couple assists, and he was clearly the best player on the field.

Clint Dempsey was Clint Dempsey. He scored a hat trick and combined well with Pulisic and Jozy Altidore in attack.

Altidore didn’t score a goal, but was huge for the US. Just look at this ball he clipped to Pulisic on the opening goal:

He will continue to receive criticism from sections of the fanbase, but remember that criticism is unfounded and he continues to be one of the U.S.’ most important players.

It was widely expected that the US would play a 4-1-3-2, and that would prove correct. But Pulisic playing in central midfield as a No. 10 was not as expected — although it was plenty welcome — and it showed an attacking intent that we didn’t see with Klinsmann in recent years. Sebastian Lletget was the original starter in right midfield, but was injured after a goal and 16 minutes and was replaced by Alejandro Bedoya.

The concern with this formation is the space next to Bradley. He could easily get isolated if Pulisic and/or the wingers don’t cover that space. That never really happened against Honduras, but against a better team, it could be a death knell for the U.S. In Panama on Tuesday, don’t be surprised if Arena rolls with a flatter 4-4-2 and starts Kellyn Acosta in midfield and pushes Pulisic wide.

Its purpose was to put the best attackers in their best positions, though, and for this game, it worked magically.

Like Altidore, the captain has received a ton of criticism from some of the fanbase over recent years, and like Altidore’s, that criticism is completely unfounded. Michael Bradley is, as Landon Donovan said on the broadcast, a world-class defensive midfielder when played in the correct role.

He’ll give the ball away every once in a while, but for the most part, he is a wonderful passer of the ball, he is tactically sound every time, and perhaps most importantly, he is a huge locker room leader. Friday night was another display of his talent, even without the magnificent goal he scored.

4. The backline was stagnant — and that’s okay

Center back Geoff Cameron and Jorge Villafaña played right back and left back in San Jose. Cameron, who is usually a starter in central defense, was forced out of necessity to play there, and Villafaña was solid in his first real opportunity with the national team.

The trend nowadays seems to be that the full backs are another element of the attack, and should push forward as much as possible. But that was not the case for the US Friday night.

Neither did much of anything on the overlap. They occasionally supported the wingers a bit, but for the most part, stayed on the backline. Part of the reason for that was the potency of Honduran wingers Alberth Elis and Romell Quioto. But the main reason was that the attack didn’t need them. Enough players were dedicated to the attack, so the full backs could afford to stay home more than usual.

This is completely subjective. There is no method to this madness, although 6.0 is the average. My player ratings:

— Geoff Cameron (RB): 6.5: He was quiet. He picked up a yellow card and was eventually subbed off.

— Omar Gonzalez (CB): 5.5: There were multiple instances where Gonzalez looked asleep, and it could have resulted in a Honduras goal.

— John Brooks (CB): 6.0: He was better than Gonzalez, but he wasn’t completely sharp all that much either. He was subbed off due to, apparently, dehydration.

— Jorge Villafaña (LB): 6.5: Villafaña upped his national team stock a bit. He combined well with his former teammate Nagbe up the left flank.

— Michael Bradley (CDM): 9.0: His goal was far from the only element of Bradley’s game that was on-point.

— Christian Pulisic (CAM): 9.5: The only reason he didn’t get a 10 was due to the occasional sloppy turnover.

— Darlington Nagbe (LM): 8.0: It does wonders for this team when Nagbe is on the field and in the correct position.

— Jozy Altidore (ST): 9.0: No goals, but a wonderful performance from Altidore.