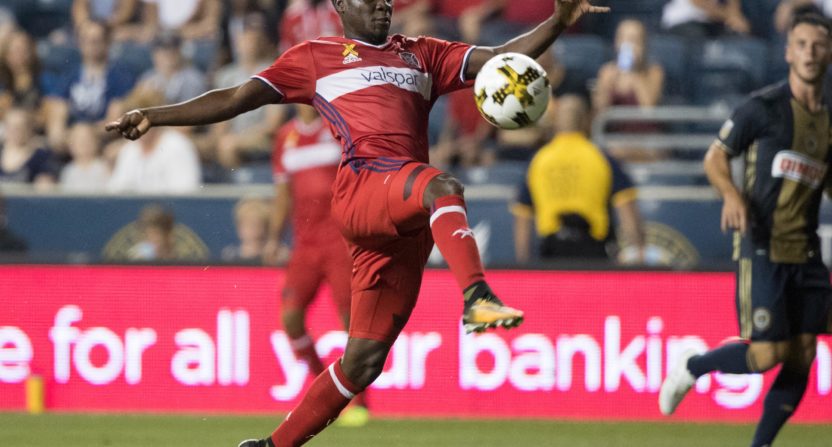 David Accam has been the center of speculation for months. The Chicago Fire left him out of their starting lineup a few times over the summer and with his contract expiring after the 2018 season, many expected that he would be dealt before the year ended.

But an injury to Michael de Leeuw complicated things, and a newly-ambitious Chicago, led by Golden Boot winner Nemanja Nikolic, were in the Eastern Conference’s top three. Accam stuck around and started in their playoff loss to the Red Bulls while continuing to acknowledge the rumors around him.

“I’ll be honest: there are a lot of offers from teams,” he admitted after their 4-1 home victory over the Revolution on August 5, “and for me it shows that I’m playing really well … My head is still here, and the rumors will always be there.”

Those rumors didn’t go away even after he accepted his player option for 2018 (he said he accepted back on August 5, actually) and with Chicago reportedly interested in Colombian attacker Juan Quintero, they finally came true on Friday at the SuperDraft in Philadelphia. In a major trade, Accam was dealt to the Philadelphia Union in exchange for $300,000 of General Allocation Money and $900,000 of Targeted Allocation Money.

That is a haul. For a top-tier MLS winger, it makes sense, looking at the other intra-league trades that sent buckets of cash across the country. Dom Dwyer netted over a million of allocation money last summer, Darlington Nagbe went to Atlanta for a guaranteed total of $1.05 million (that could go up to $1.65 million), and FC Dallas received a total of $500,000 of allocation money for Walker Zimmerman plus the No. 1 spot in the allocation order. The Sacha Kljestan deal was the exception.

Chicago finished third in the extremely competitive Eastern Conference last year, two points behind NYCFC and ahead of Atlanta United on the wins tiebreaker. Accam played over 2,000 minutes and scored 14 goals and picked up eight assists, an impressive total for a player who likes to run into space and attack defenders 1v1.

He’s a guy who would not be expected to produce as many goals as he does — Dwyer, a traditional No. 9, scored two fewer goals in 100 more minutes — because a player like him is more often expected to provide creativity in a technical sense and a change of pace from the flank. Especially playing alongside the pure scorer Nikolic, someone putting up  box score stats like those in a league deprived of scoring from the wing is certainly worth that kind of cash.

As valuable as he is, though, Accam never seemed to get his feet under him in Chicago. He started 21 games in both 2015 and 2016 (scoring 10 and nine goals) for last-place teams that started such transedescent strikers as Kennedy Igboananike and Gilberto. As occurs a lot with good players on bad teams, Accam’s head wasn’t always completely there, resulting in underperformance.

2017 was obviously better, but Veljko Paunovic’s possession-heavy system that centered around the veteran midfield tandem of Dax McCarty and Bastian Schweinsteiger didn’t exactly tailor to the high-flying, highlight-producing game of Accam’s. While he remained productive and was a consistent injection of skill to a slow-ish team, he will never be a cog in a possession system. It’s not how he plays.

Accam needs space to move with and without the ball. He also needs other attacking contributors — namely, a hold-up No. 9 who can put the ball in the net and a creative No. 10 with a deep through-ball repertoire — which is a big reason why those ‘15 and ‘16 Fire teams won a couple of Wooden Spoons. You’re not getting the best out of Accam if he is your attack’s No. 1 guy, because he’ll be game-planned out of the final third pretty easily.

If you can give him time and space to work (Paunovic and his possession didn’t do that), a No. 10 to get him the ball, and a forward that can 1) hold it up for him and 2) finish his attacking rambles, then you have yourself arguably the league’s best pure outside midfielder.

Philadelphia can do two of the above three for Accam. They don’t have a ball-dominant midfielder to take up possession, and they are relatively content to put numbers forward. CJ Sapong scored 16 goals for last year’s terrible Union team and has shown to be one of MLS’ most physically dominant No. 9s.

The issue, one that should be in the nightmares of Jim Curtain and Earnie Stewart after all these years, is the No. 10 role. Philly’s well-known unwillingness to spend is best exemplified by the lack of any kind of attacking creator on the roster, and the fact that they haven’t had one in years.

When and if they find one (go all out on this, Earnie), they will have a pretty formidable front four. Sapong will anchor the speedy wing combination of Fafa Picault — a diminutive Accam-lite — and the Ghanaian, with the 10 playing the ball into Sapong’s feet or going direct to the flanks, where both Picault and Accam are ultra-aggressive taking on full backs. Fear for your ankles, MLS defenders.

Their central midfield, the pairing of international-quality No. 8 Alejandro Bedoya and passing No. 6 Haris Medunjanin, fits the speed-crazed M.O. of the attack. Medunjanin arguably possesses the best diagonal switches in MLS. It’s a good bet Picault and Accam will be getting on the end of plenty in 2018.

The gigantic bucket of MLS cash the Union sent Chicago doubles as a method of maintaining control for the front office. Since the regular season ended, they have added nothing to a team that missed the playoffs aside from a couple of Homegrown signings, growing the already-sky-high dissatisfaction among the fanbase.

This won’t cure all ills for the Union, but it will finally convey some level of initiative to a fanbase tired of eighth-place finishes. To build on this trade and the progress it showed, they’ll need to fill the No. 10 role and then add some other pieces, specifically a left back that can overlap and complement Picault. Philly also have to grow some players already on the roster, especially defenders Josh Yaro and Keegan Rosenberry, who have stalled in their development.

Chicago has a talented enough roster to where they could afford to part with Accam. Now, they have the funds to dump on Quintero, who could potentially fill their attacking midfield role. No. 5 overall draft pick Jon Bakero, drafted after the Fire sent a haul to Minnesota United for the pick, could step into that spot as well.

The Fire will have to devote some of that cash to the goalkeeper position. Matt Lampson, already an upgradeable starter, was dealt to Minnesota as part of the package sent to the Loons for the draft pick. Homegrown signing Grant Lillard will fill Joao Meira’s spot on the backline, leaving little other needs for a team that should remain among the conference’s top tier in 2018.

Maybe, if they play their cards right, the Union will join them up there.