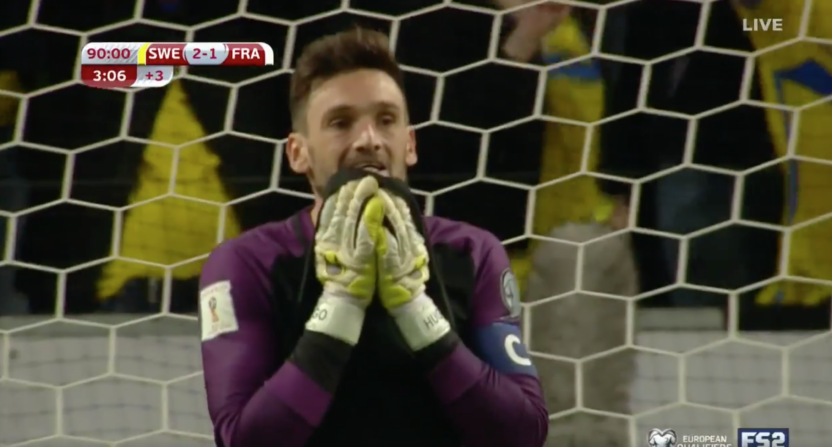 In the 92nd minute of a World Cup qualifying match on Friday, France goalkeeper Hugo Lloris made a brutal mistake that cost his team the game. France and Sweden were deadlocked at 1-1 when Lloris left the box in the closing seconds in an attempt to clear the ball.

The only problem was Sweden forward Ola Toivonen connected on a strike from midfield that gave his team a stunning 2-1 victory.

Hugo Lloris, what are you doing??

This mistake from the French captain gave Sweden the win in the final seconds! https://t.co/BTNoVlM6CO

Naturally, that made him the butt of jokes from soccer fans around the world.

Hugo Lloris walking into the dressing room like… #SWEFRA pic.twitter.com/iWwNN6Y1SB

Does he get the assist at least

Hugo Lloris purposely having his occasional blunder tonight in order to keep clubs away from bidding for him. This is why I love the man.

Hugo Lloris has just thrown the game away…What a finish though to be fair to the lad?

The goal wasn’t only embarrassing for Lloris and France, it was also costly. Sweden’s victory ties them with France atop the qualifying group with four games left to play. The winner of the group automatically qualifies for the World Cup, while the runner-up must participate in a playoff to earn qualification.