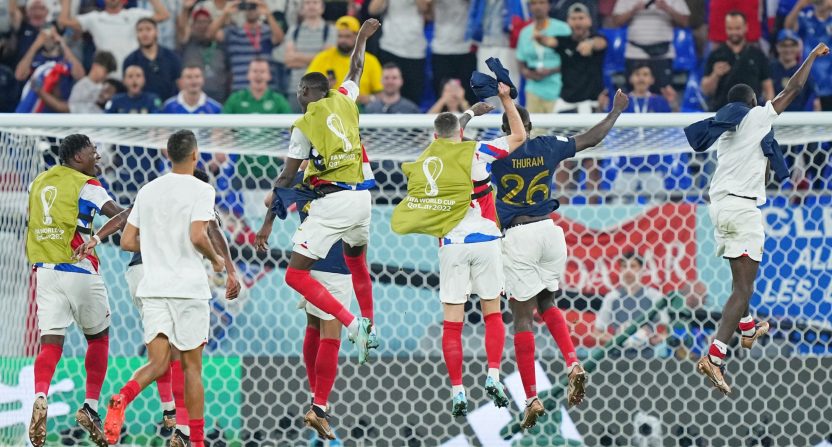 With France beating Denmark 2-1, they have become the first team in the 2022 FIFA World Cup to clinch a spot in the round of 16.

Les Bleus started unable to break down the Danish defense, with the only clear chance coming from a quick ball to Kylian Mbappe, quickly snuffed out controversially by Danish defender Andreas Christensen.

That is a smart foul on Mbappe. He’s too fast would have had a goal. Denmark off to a slow start, France looks terrific

The controversy stemmed from Mbappe being denied a clear goal-scoring opportunity which usually results in a red card for the guilty defender. However, Anderson only received a yellow card.

Fifteen minutes into the second half and Mbappe passes a ball into the back of the net, taking the lead and with it being the first team from the group stage to secure a berth in the round of 16.

Mbappe is good at soccer.

France take the lead in the second half! They will advance if this result holds. #FIFAWorldCup
(via @TelemundoSports)pic.twitter.com/O12r5RWchw

With his goal against Denmark, Kylian Mbappé has just become only the 10th Frenchman to score 30 goals for the national team. 🇫🇷

He has now scored as many goals for Les Bleus as Just Fontaine and Jean-Pierre Papin. 👏👏#FRADEN #Qatar2022 #FIFAWorldCup pic.twitter.com/TKskJ20UIo

But Denmark would bring the score to 1-1 with the goal coming off Andreas Christensen’s head just seven minutes after Mbappe scored the opener.

Andreas Christensen (+2500 GOAL) with the equalizer!pic.twitter.com/cNYPrDQtJn

In what would have been a heavy favorite for the goal of the tournament, French defensive midfielder Adrien Rabiot made great contact on an overhead kick but sent the ball well over the crossbar.

Adrien Rabiot nearly made a goal of the tournament contender 😳 pic.twitter.com/eo9fkC4bkH

Less than ten minutes later, Antoine Griezmann whips a ball in from out of the box to find an airborne Mbappe, who nudged the ball with his thigh past Danish keeper Kasper Schmeichel.

France takes the lead in the 86th minute 🇫🇷 pic.twitter.com/vOulTGkSHl

The score would hold, sending the defending FIFA World Cup champions to the round of 16.