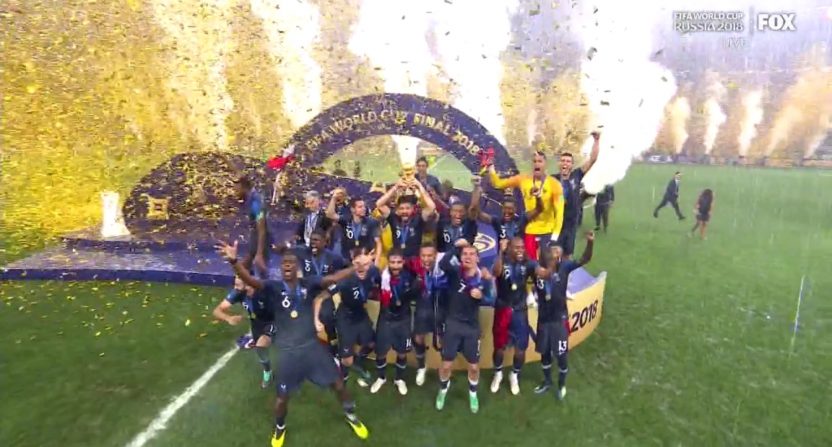 In a World Cup that had just about everything, the World Cup final took what happened in the previous 63 matches and condensed it all into a 90 minute circus that had pitch invaders, an own goal, a penalty, VAR, an unthinkable howler and thunder and lightning. In the end, it would be France taking the honors and defeating Croatia 4-2 to win their second World Cup trophy.

Like most matches in this World Cup, there were goals upon goals upon goals. Only one match had a scoreless draw and these two teams made sure that wasn’t happening here.

The first goal came from inauspicious circumstances. Antoine Griezmann controversially won a foul that could arguably have been a dive and he opened the scoring with a Mario Mandzukic own goal. It was the 12th own goal, by far a record, and the first in a final.

Croatia answered just ten minutes later with Ivan Perisic being patient and ripping his shot into the goal.

Ten minutes after that, we got another controversial play. This time, a French cross hit Perisic in the hand and it wasn’t originally called. After referee Nestor Pitana reviewed the play, he awarded a penalty which was converted by Griezmann.

The actual handball wasn’t that controversial, the controversy was due to the argument whether or not that play was deemed a “clear and obvious” error. Some felt it was and appreciated the ability to correct the call while others felt that it either wasn’t a handball or that it was but it wasn’t an obvious mistake.

The second half began and in the 52nd minute, four people dressed as police officers stormed the pitch, stopping play. The four got pretty far on the pitch before getting caught.

Minutes later, the anti-Putin Moscow based rock band Pussy Riot tweeted that they claimed responsibility for the invasion. They were protesting in hopes Russia “lets all political prisoners free” and to “allow political competition.” While Putin doesn’t run unopposed, he usually wins his elections by wide margins thanks to his power within the country and just about everything involving Russia. And they did it in front of Putin and the entire world.

A couple minutes later, France scored goals three and four in quick fashion and that seemed to seal things.

Paul Pogba’s goal was big but Kylian Mbappe’s goal was historic. At 19, he joins Pele as the only teenagers to score in a World Cup final.

But while things seemed over, there was still time for one more twist. French captain Hugo Lloris was taking a back pass from a defender. Lloris took a bad first touch, saw Mandzukic bearing down on him and messed up, gifting an easy goal. Maybe it was a nice way to give Mandzukic a goal of his own after the own goal.

The FIFA #WorldCup trophy is going back to France for the first time since 1998. 🇫🇷 pic.twitter.com/wj1wnauj4R

Was this the great World Cup? It’s tough to say. I can’t say anything about the older World Cups. I’ve only been alive for eight World Cups and the first tournament I remember watching was in 1998. I can say that what we watched this past month was something I have never seen in all the World Cups I have watched and it’s certainly a tournament I will never forget.

This World Cup has broken records on own goals, set piece goals and fell just two shy of most goals in an entire tournament (1998 and 2014 had 171 goals to 2018’s 169). With just one scoreless draw and a high scoring final, even the haters could find something to appreciate. And if they didn’t, well then nothing will convince them otherwise.