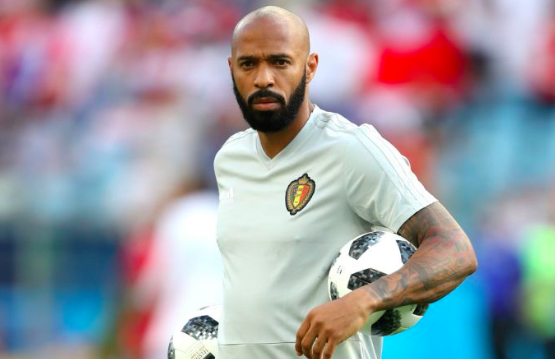 One of the intriguing storylines in the World Cup came in the semifinal between France and Belgium and the possibly conflicted feelings of Thierry Henry.

Henry is a French soccer legend who most notably starred for Arsenal and Barcelona as one of the best strikers in Europe throughout the 90’s and 2000’s. He was also France’s top scorer when they last won the World Cup in 1998. But this year, Henry was on the sidelines as an assistant coach under Roberto Martinez with Belgium. In the end, it was the country Henry played for that emerged victorious and ended up winning the World Cup.

However, Henry won plaudits for his work with Belgium as he helped lead the Red Devils to their best ever World Cup finish in third place. In particular, he drew praise from star striker Romelu Lukaku, who said that Henry’s coaching and mentoring was the best thing that had happened to him.

With the World Cup now behind us, Henry has decided that he wants to go full-time into coaching, leaving behind a pretty successful media career in the UK with Sky Sports.

1/3 Over the last 4 years I have had some extremely rewarding coaching experiences in football. These experiences have only made me more determined to fulfil my long term ambition to become a football manager. pic.twitter.com/NOQZzuif4m

2/3 It is with sadness, therefore, that I have decided that I must leave @SkySports to enable me to spend more time on the pitch and concentrate on my journey to achieving that goal. pic.twitter.com/EdC4s8AMaW

3/3 I would like to thank everyone at Sky for making me feel so welcome and at ease throughout my time with them and I wish them all the best for the future. Great memories. pic.twitter.com/k5Ysgr0Onn

It’s a shame that with the corporate synergy between Sky and Fox at the Murdoch level that we never got to see Henry (or any number of Sky’s deep bench of analysts) work for American television throughout World Cup coverage. It would have been a real boost to Fox to have some sort of cross-promotion, especially where their lineup of talent wasn’t that deep.

It’ll be interesting to see if Henry can get a top level job at the club level now that the new season is so close to a reality with many teams already starting their preseasons as the World Cup came to a close. Henry would have been a perfect fit for Arsenal with Arsene Wenger finally stepping down, but the job went to Unai Emery.

Henry had been with Sky since 2015 as a pundit and was making a very healthy salary of 4 million pounds per year. In that respect, he’s like the European soccer version of Jon Gruden!