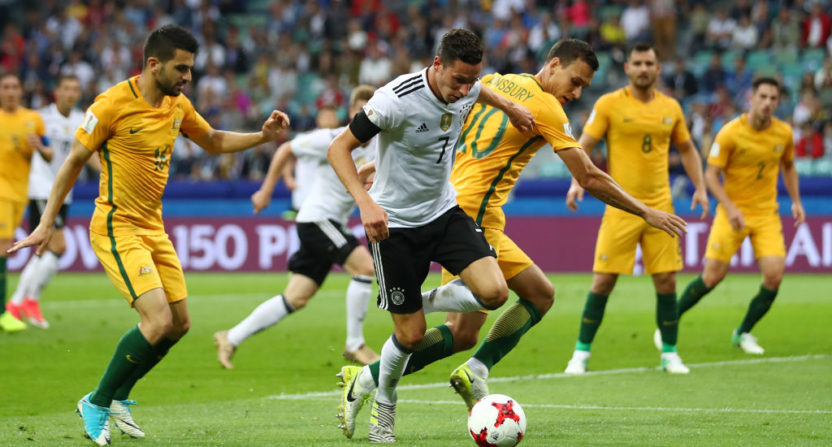 Whatever anyone thinks of the Confederations Cup and its significance, what cannot be disputed is how important the tournament is for seven of the nations currently taking part. They all brought their strongest possible squads with all of their biggest names and brightest talents not only to prepare for the World Cup next year, but to bring home a trophy this year. But for Germany, their approach to the tournament can be summed up by this quote from Oliver Bierhoff:

“For us, the first priority is in developing the team. Winning the tournament is our second priority.”

Only seven players from last year’s Euro squad are in Russia, and almost none would be considered guaranteed starters for the World Cup next summer. While some would argue this devalues a tournament that for whatever its worth does have its own unique charm, only Germany and its unique position in international soccer can pull this off, and pull it off in the way they have.

Germany’s position atop the sport is almost unquestioned, and when a manager like Jogi Löw knows the way he wants his teams to play and knows in large part his strongest XI, he can afford to use a tournament like the Confederations Cup to look at new players. And he, and Germany, are blessed with the concurrent UEFA Euro U-21 Championships in Poland, where the pool is expanded even more. Players like Neuer, Kroos, Hummels, Müller among others don’t need to prove themselves at the Confederations Cup, or earn a spot at the World Cup next summer, but Julian Draxler, Timo Werner, and many on this squad certainly do. Not only do Germany have an incredibly deep pool of talent to draw from, they also have the luxury of being able to bring a C+ squad to Russia, still be incredibly competitive and evaluate talent for the back end of next summer’s 23 man roster all at the same time. It’s a unique position that only they can occupy.

Will this be a trend at future tournaments, especially the Confederations Cup (that is if this isn’t the last one)?  In North America, the U.S. and Mexico use off year Gold Cup’s for exactly the same purpose as Germany is using this Confederations Cup: evaluate players at the back end of the pool and see who stands a chance of becoming an important squad player or even more for the bigger games ahead. Neither team is in real danger of missing out on World Cup qualification, and they can easily win the Gold Cup without their best squads. It just so happens that Germany’s “Gold Cup” turns out to be a tournament that both of those nations have taken very seriously in the past, and in the present.

“After the World Cup title in 2014, we need to now generate a new competitive situation and need to make changes. Our world champions, Champions League winners and Bayern’s many title-winning players need as a sort of motivation,” Löw told “Bild”.

“We cannot just take the 20 players who won the World Cup in Brazil to the 2018 World Cup in Russia. For our goal to win the title again, fresh blood will be good for us. In the end, if three or four players make the World Cup squad out of the Confed Cup, that is already a success.”

Most national teams would kill to be in the position Germany currently occupies, but it’s a niche that only they themselves can fill. Even Portugal and Chile, the two true favorites for this tournament, still have something to prove that Germany doesn’t, which means while Cristiano Ronaldo is slogging away for Portugal, his teammate Toni Kroos can relax during a rare June break.

Most teams will take any tournament as a chance to win a trophy with their best available squad, especially on the international level, where those opportunities are scarce.

Germany doesn’t have to, because they have nothing to prove and no one to please but themselves. The ultimate judge of whether this plan is successful comes next year, but until then, they only need their own validation when those on the outside criticize them for bringing a less than stellar squad to the Confederations Cup.

And what’s really scary: this Germany side at full-tilt can easily beat almost everyone else’s full strength squad. They have nothing to be ashamed of, and have nothing to hide.

But don’t expect other teams to try to replicate this in the future, because no one else is Germany.