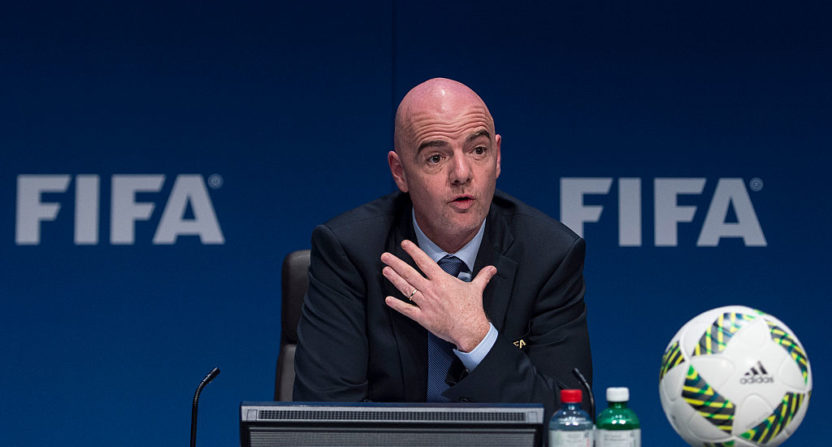 FIFA President Gianni Infantino said the quiet part out loud on Saturday in a room full of reporters on the eve of the 2022 FIFA World Cup in Qatar.

What followed was a stunning but unsurprising laundry list of whataboutisms and offensive remarks about why Qatar shouldn’t be criticized for its human rights record or discrimination against women and the LGBTQ+ community.

Having already sent out a letter to federations asking them not to protest Qatar’s human rights record, Infantino — who was just reelected FIFA President unopposed this week — said people should essentially stick to sports.

Infantino: "We want a moment where we don't have to think about [the difficult things in life]. We want to concentrate on something we love, on football."

Not sure I've ever seen the basic comms strategy for this World Cup summed up quite so neatly.

Infantino also argued that he knows what it’s like to be discriminated against because “I had red hair.”

Having overseen FIFA after Sepp Blatter was banned from the organization for his role in the bribery and money laundering scheme that awarded the autocratic state of Qatar the World Cup, Infantino oversaw the 2018 World Cup in Russia and has a warm relationship with Russian dictator Vladimir Putin.

It’s been reported fellow autocratic state Saudi Arabia will bid for the 2030 World Cup, which is a process Infantino will oversee.

Infantino, who is Swiss-Italian, said Europe cannot criticize Qatar because of its history.

“I think for what we Europeans have been doing for the last 3,000 years around the world, we should be apologizing for the next 3,000 years before starting to give moral lessons,” he said.

On a question about allowing Iran to partake in the World Cup given its brutal crackdown on protestors and support of Russia in its war against Ukraine in recent weeks, Infantino suggested FIFA should host a tournament in Iran.

“Are they all monsters?” he asked.

The soccer community was aghast at Infantino’s comments which distracted from the very thing he wanted people to focus on. Human rights groups responded in force as well.

"I think this will be the World Cup that really underpins just how dirty the game is."