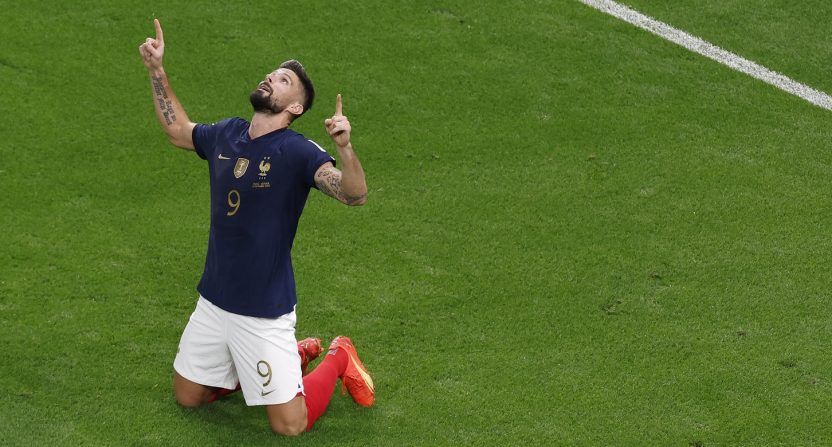 Thierry Henry has some company in the France record books. With a brace vs. Australia, Olivier Giroud tied Henry for the most goals scored at 51.

France dominated the FIFA World Cup groups stage match, winning 4-1. Here’s a look at the goal that bumped Giroud up from 2nd to T-1st.

With this goal he ties Thierry Henry for the most goals in France men's national team history 👏👏 pic.twitter.com/3GOz3FqUrF

Ballon d’Or winner Karim Benzema was expected to lead the French attack until a thigh injury in training knocked him out of the squad. That carved out more of an opportunity for the 36-year-old Giroud, who has been a fixture for his country for years. He was part of the 2018 World Cup-winning side, starting six matches, but failed to put the ball in the back of the net. This was Giroud’s first World Cup goal since 2014 vs. Switzerland. With France’s injuries, the Milan striker will surely be needed as they look to repeat as champions.

No man in France history has scored more goals for the senior national team than Olivier Giroud:

Both Henry and Giroud started their club careers in France before moving to Premiere League side Arsenal during their prime. While Giroud had five seasons of 10+ goals for Arsenal, he was not nearly as prolific as his countrymate. Henry sits atop the Gunners’ goal-scoring list at 228 in 377 appearances.

The pair never played together for Arsenal or France, but Henry said he wished he had the chance to link up with Giroud in a 2017 interview. Henry said goodbye to National Team duty at the 2010 World Cup and Giroud earned his first cap at Euro 2012.