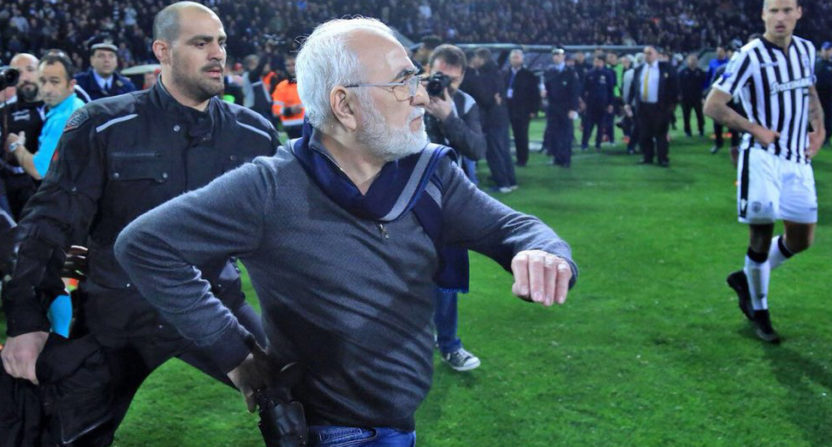 There have been plenty of stories about crazy soccer fans, but it’s the actions of a club owner that have led to the suspension of an entire league. That would be Ivan Savvidis of PAOK FC, a Thessaloniki-based club that was in contention for the league title heading into Sunday’s match against league leaders AEK Athens.

PAOK was initially deducted three points over a previous incident involving a thrown object that hit a Olympiakos coach, and forced to play against AEK in front of an empty stadium, but that decision was overturned only hours before Sunday’s kickoff, putting PAOK just four points back and letting them bring fans in. And then, further controversy came when PAOK scored in the 89th minute for an apparent win, only to have that decision reversed after the referee conferred with his assistants for a couple of minutes.

That led to PAOK owner and president Savvidis invading the pitch (one of two times he did so during the match) with a gun:

PAOK president storms on the pitch, officials make a run for it. Fans riot, police on the pitch. Game suspended

Meanwhile in Greece… PAOK president Ivan Savvidis takes to the pitch, armed with a gun, to remonstrate with the ref after his team had a late goal disallowed. pic.twitter.com/Vg8SjtWqY1

Greece’s Superleague has been suspended indefinitely and the country threatened with a ban from world football as the government scrambled to contain the fallout from the extraordinary scenes on Sunday when the gun‑toting oligarch owner of Paok Salonika stormed on to the pitch in a fit of fury to challenge a goal.

“We have decided to suspend the championship indefinitely,” the deputy sports minister, Giorgos Vassiliadis, said after holding two hours of emergency talks with the prime minister, Alexis Tsipras. “The most important thing is that rules apply to everyone. We are in communication with Uefa and the championship will not resume unless there is a new and clear framework, agreed by all, to move forward with rules and regulations.”

Speaking hours after the announcement of an arrest warrant for Paok’s proprietor, Ivan Savvidis, the politician insisted the government would not renege on its decision whatever the “political cost”. He said: “We are not going back, we will continue the fight for transparency and a better football.”

Fifa said Greece could be suspended from world football if its national governing body fails to take “proper actions by the competent bodies to eradicate all sorts of violence in order to guarantee the smooth running of the national competitions”.

Oh, but Savvidas has a great statement in his own defense:

A spokesman for Savvidis told the Russian news agency Tass: “He didn’t threaten anyone with a gun. It isn’t forbidden to carry a weapon in Greece.”

I’m sure that makes the officials feel a whole lot better. It’s just totally normal to have a club president run on the pitch with a gun and start threatening referees with comments like “You’re over,” you know? But hey, in a later statement, he said he’s sorry, and was only trying “to protect tens of thousands of PAOK fans from provocation, riots and casualties“:

“I am deeply sorry for what happened,” Savvidis said in a statement on PAOK’s website. “I had absolutely no right to enter the pitch the way I did. My emotional reaction stems from the widespread negative situations prevailing in Greek football lately and from all the unacceptable, non sports-related events that took place towards the end of the PAOK-AEK Athens encounter: the actions of the referee and his assistant, the match suspension, the protests and invasion on the pitch by many people from both sides.

“All that could lead to uncontrollable situations. My only aim was to protect tens of thousands of PAOK fans from provocation, riots and casualties. Please believe I had no intention to engage in a brawl with our opponents or the referees. And I obviously did not threaten anybody.”

Well, regardless of that, the whole league has still been suspended over this. And no date’s yet been set for resumption of matches. So maybe Savvidis is protecting PAOK fans after all, just not in the way he claimed.