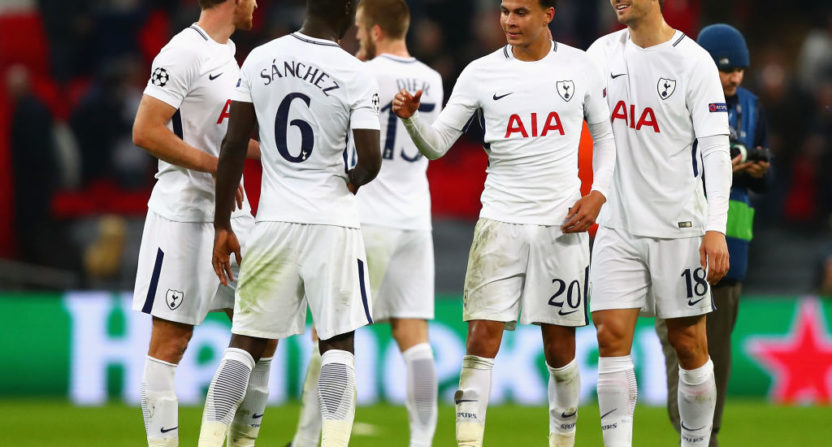 For whatever reason, Tottenham Hotspur is held to a higher standard in “proving themselves” than almost any other club in England. Harry Kane is a “one season” wonder, until the world realizes only Messi and Ronaldo have scored more goals in this calendar year. Spurs have a soft center and always capitulate when the going gets toughest, only to realize that they’ve accumulated more total points in the last two seasons combined than any other club. They have a Wembley problem until playing the defending Champions of Europe off the park like they were Crystal Palace.

But under Mauricio Pochettino, Tottenham has always met those standards, as ridiculously high as they are, and set new ones for themselves. After a comprehensive 3-1 win over Real Madrid, even those with Lilywhite colored glasses are now recalculating expectations for what this team may be able to accomplish. And this Harry Kane quote postmatch sums it up:

“Definitely, why not? We have to believe. Maybe nobody who watched that will want to play us although everyone in the Champions League is a good team. It will give us a lot of confidence and belief and we have to build on it.”

If Spurs can take four out of six points from Real Madrid, whether they are at a low ebb of form or not, there’s no reason to believe they can’t win the Champions League. There is no higher standard to meet than the bar they’ve just cleared on the European stage. And it wasn’t as if they fluked their way to win; there was little doubt who the better team was at Wembley or at the Bernabeu. It proved that Tottenham wasn’t just a team that capitalized on the misfortune of the other big boys across the Premier League for their success, but that they got there on their own.

Or as Mauricio Pochettino put it, Spurs certainly trusted the process.

“What is important for me is that we’re in the next round. After last year when we were in the Champions League and we were out of the running in the Group Stage after two games, this year we are in a very difficult group of Real Madrid, Borussia Dortmund and APOEL – who have shown that in their performances against Borussia that they are no pushovers.

So what’s important for us at the moment is that we’re going through a phase of consolidation, we’re growing in confidence, we’re starting to believe in our potential, our qualities.

We’re able to compete now with the biggest teams on a physical and a mental level and this is preparing us very well for what’s coming in the future and in particular in order for us to achieve the goals we have, those goals are always of course to win to win big competitions, this is what we dream of. If we get there this year whether we do or we don’t that remains to be seen, but we’re certainly moving in the right direction.”

Becoming the first English team to beat Real Madrid since 2009 and the first team to beat them in the Champions League group stage since 2012 is no fluke. And while it’s now been seven years since the team of Bale/Modric and Harry Redknapp beat the then defending Champions of Europe, Inter, by the same 3-1 scoreline, this is no Halley’s Comet.

There have been hiccups along the way this year for sure. There have been some puzzling results at Wembley in the league, and there was blowing a 2-0 lead in the League Cup to West Ham as well. But they sit right now as the clear third best team in England only behind the two Manchester teams, have trounced this year’s Champions League group of death to qualify for the knockout round with two games to spare, and they’ve done that without being fully fit at any point this season.

What’s left for this team is to win trophies, and they have three of them they can win. While they aren’t favorites to win any of them, you wouldn’t discount their chances to win at least one this year, and it could very well be the Champions League trophy in Kiev come the end of May.

All of the exorbitant standards held for Spurs throughout the years that other clubs never had to meet have all been smashed, no more evidence needed after a night at Wembley as they just had. Nothing about this Tottenham team is a fluke.

And if they can beat Real Madrid as they just did, why can’t they beat anyone else in the same way? As they just proved, for Tottenham, the sky is now truly the limit.