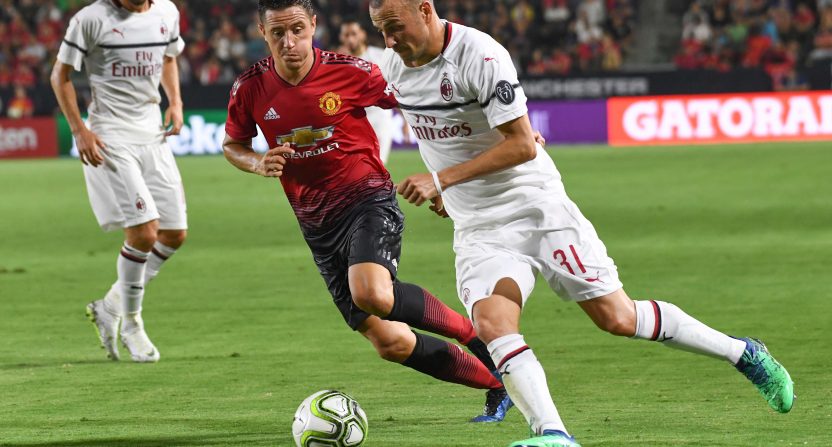 European clubs coming to the Untied States to play preseason friendlies has been going on for decades. One such friendly, Lazio took on Santos at Yankee Stadium in 1968 as a means of reconnecting with their immigrant fans and since then it’s only been logical for teams to come back.

With the sport taking off in the early to mid ’00s, European clubs began coming stateside with even more regularity, often touring the country and playing against various MLS clubs.

Then everything changed in the summer of 2013 when the International Champions Cup was born. The concept was simple, let’s get the biggest teams in Europe to come to the United States and play each other, and we’ll make it a quasi tournament so the games have some sort of meaning.

The following year they came back even bigger. Liverpool, Manchester United, Manchester City, AC Milan, Inter Milan, AS Roma, and Olympiacos all signed on to participate. The teams were divided into two groups of four that played a round robin schedule, highlighted by Manchester United and Real Madrid setting an attendance record for a soccer game in America when 109,318 fans came to see them play at Ann Arbor’s Michigan Stadium. The two group winners (United and Liverpool) would go on to meet in the “final” in Miami.

The International Champions Cup was officially here, and it was a success, but that doesn’t mean it still didn’t have problems.

Following the 2014 edition, then Manchester United manager Louis van Gaal lashed out at the organizers regarding the brutal travel schedule United had to endure, playing in Denver, Washington DC, Ann Arbor, and Miami. Traveling that much is not ideal for a team trying to get ready for the season.

Organizers took note and once again changed the format of the “tournament.” Teams were grouped by region, minimizing travel. They eliminated the final, which eliminated adding additional travel to two of the teams. They also expanded the tournament, playing games in Asia, Australia and having a couple games in Europe.

That brings us to the current version of the tournament.

There’s no doubt you’ve already heard complaints about this year’s International Champions Cup. If it came to your city you were probably turned off by the obscenely high ticket prices. If you’ve watched it on TV you’ve already noticed some small crowds or at least small crowds when seated in an NFL stadium. If you tuned in to one of the event’s showpiece matches, Liverpool vs. Manchester City, then you were more than likely horrified at the state of the pitch that that match was played on.

It’s gotten so bad that ESPN commentator Ian Darke has pulled some punches. His disdain for these games is clearly evident in his broadcasting. And to a degree, Darke is correct, which makes it fair to ask whether this tournament has run its course in this country?

This year’s edition was always going to be a tough sell. Coming on the heels of the World Cup, the ICC can market that the biggest stars of the World Cup are all coming to the United States all they want, but fans are smart enough to know some of those players won’t actually be playing the games.

One of the consequences of the sport’s rise in popularity is that fans are now much smarter. The ICC isn’t the only show in town. Every other year, the US hosts the Gold Cup (which also has overpriced tickets). Two years ago, the country hosted the Copa America. Fans these days are smart enough to know not to overpay for what is not only a meaningless game but a game where you won’t even recognize most of the players on the field.

Diehard fans will be quick to tell you that it’s not about the game. Along with the price of the ticket, you also get access to fan events and open training sessions where you can meet some of the players (again though, players that went deep into the World Cup will not be there). The game isn’t really what you’re paying for.

But those fans are the diehards, they’re the ones who have already been to Anfield, or Old Trafford and seen a game there. If you’re a new fan and were going to shell out money, wouldn’t it be worth saving up just a little more and taking a trip there this winter to see an actual game? Even Manchester United manager Jose Mourinho said he wouldn’t pay to see these games.

Fans being smarter also brings us to the final problem of the ICC, the fact that the ICC is trying to tell us that these games matter. They don’t matter and the teams are simply trying to get into shape for the upcoming season. If they did, these teams wouldn’t be bringing out their youth players or substituting full teams at halftime. Trying to tell us that teams find these games important to win is insulting. While Ian Darke is blasting it, the rest of the commentators on ESPN seem to be touting it’s glory and talking of teams trying to win it. For actual fans of these clubs, and really who else is watching these games, it almost seems patronizing.

Besides, since there’s no longer a final, it’s impossible to really know who’s “winning.” This season’s edition features 18 teams with each playing three games. The “best” team after three games will be declared champion. How does that make any sense when they don’t play 14 other teams? Honestly, do you even know who is top of the table this year? (As of July 31, Dortmund is leading with seven points)

The ICC has become a double edged sword. On one hand, empty or non-full stadiums make it seem like fan interest is fading in the United States. But on the other hand, it has changed how teams prepare for the new season. Top teams can no longer just roll through a few MLS or Asian sides. Even though the results don’t matter, if you aren’t playing against the other top European teams you’re entering the season a step behind your rivals.

The fix should be easy. For starters, the ICC should focus more on their Asian markets. There are big stadiums there and rabid fans who have been underserved in recent years. You can sell out those stadiums with relative ease for now.

Next, they should drop the “cup” from their name. In 2004. Manchester United played Bayern Munich, Celtic, and AC Milan in the “Champions World Series.” That name couldn’t be more perfect. There’s nothing on the line, just a series of games between some of the biggest teams in the world. Why not call this the International Champions Series?

Lastly, the ICC would be best off knowing what else is going on in the sports calendar. Obviously with a World Cup this summer, many teams would be short on players. The same thing will happen in two years following the Euros. There will be a little damage with the Copa America next summer but not as much. During the even years, change up the venue and utilize more MLS Stadiums where you won’t be playing on a field damaged by a Taylor Swift concent. Why do you need to have Borussia Dortmund vs. Benfica at Heinz Field when it would be much better served to be at MAPFRE Stadium? There, demand would be higher in a 20,000 seat stadium than a 68,000 seat stadium and maybe the higher ticket prices would be more in line with that demand.

At the end of the day, this whole thing is a big cash grab and the ICC as well as the teams benefit hansomely. There will always be diehards who travel around the country to see their teams and the ICC does a good job of accommodating those fans. However, if they continue going in the same direction they’ll risk agonizing everyone else, and overplaying their hand in the United States.