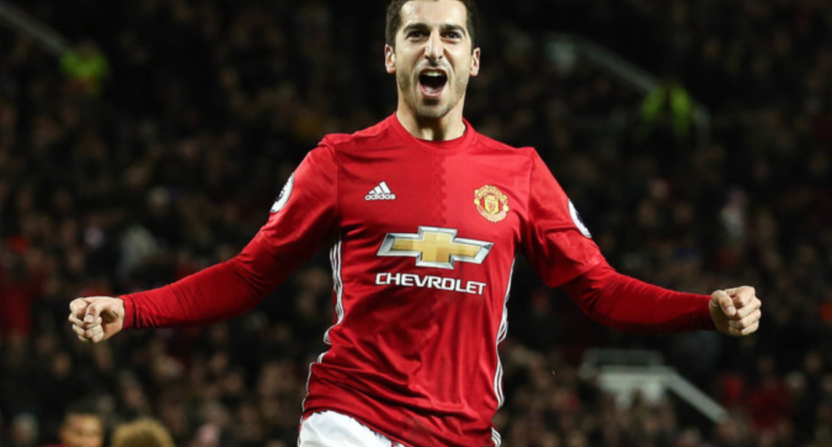 The Alexis Sanchez “will he or won’t he stay at Arsenal” saga has been a story that has been in the headlines for far too long. About a year and a half, to be exact.

But the soap opera seems like it will finally come to an end, with Sky Sports reporting on Tuesday that Sanchez would be heading to Manchester United in a straight swap for Jose Mourinho-exiled Henrikh Mkhitaryan.

Sky Sources: Deal involving Alexis Sanchez and Henrikh Mkitharyan would be a straight swap with no fee. #SSN pic.twitter.com/fUpuOgYzuH

This deal is certainly an eyebrow-raiser. On the surface, it makes sense. Alexis wants to leave Arsenal and Mkhitaryan would certainly want out of Manchester United after falling out of favor with manager Jose Mourinho — again.

On Wednesday, The Telegraph reported that Sanchez had agreed to a four-year contract at United.

But of course, no deal is this ever this simple. Just because the clubs agreed on a player swap, it still doesn’t work like in American sports where both teams just inherit the players’ contracts. Instead, both players have to agree to new contracts in order for the deal to go through. That gives Henrikh Mkhitaryan a lot of power.

This is where the deal gets interesting. Have you noticed players linked with moves away from Manchester United (and Manchester City), mostly for not fitting a new manager’s style, haven’t been getting sold in recent years? That’s because the wages they earn at United and City are higher than what anyone else could give them.

For most players, taking a massive pay cut to play in a much smaller league simply isn’t worth it. They’d either prefer to sit in the doghouse or fight to prove the manager wrong.

Mkhitaryan is in the same situation. He’s not going to take a drastic pay cut to go to Arsenal, especially after having success early this season. He certainly thinks he can work his way back into Mourinho’s good graces. That means Arsenal will definitely have to pony up the cash to sign him.

That could very well be where things get dicey for Arsenal.

If there’s one thing you can learn from American sports it’s that swapping an expiring contract for a long term bad contract just so you don’t lose a player for nothing is a good way to destroy medium term success.

For Arsenal, adding Mkhitaryan allows them to save face, slightly, amidst losing Sanchez. Mkhitaryan on his game can be a great player, but even on his best day he wouldn’t measure up to Sanchez.

There are a lot of red flags for Arsenal here, with the biggest question being whether or not Mkhitaryan will ever have his day.

Since joining Manchester United a year ago, the Armenian has barely adapted to the Premier League. Last year, during a season when he was in and out of the team, Mkhitaryan scored just four goals and added one assist. However, Mkhitaryan hit the ground running in the Europa League. He scored six goals in 11 appearances, five of which came in the knockout rounds including a crucial goal in the final.

Mkhitaryan has a history of taking time to adapt to new places. He struggled in his first season at Dortmund before having a 23-goal, 32-assist second season. At United, it looked like he might be on a similar trajectory. In their first three games this season, Mkhitaryan had five assists. But since then, he has gone back to looking completely lost.

What Arsenal lost in Sanchez is a dynamic goal scorer who can also set up his teammates. What they’re gaining in Mkhitaryan is an attacking midfielder who can score, but is known more for his ability to create chances for his teammates. Except, is he really? Since coming to England, he has just six Premier League assists, five of which came in the first three games this year.

The most alarming flag is how much better Mkhitaryan looked when playing in the Europa League. When a foreign player looks that much more comfortable playing against non-English teams, it’s usually a tell-tale sign that he just isn’t adapting to the more physical English game.

That’s not a knock on Mkhitaryan, there are plenty of talented players who never really catch on in England (Angel di Maria comes to mind). But building your immediate future around one of those players can really set back Arsenal.

On the other side of the deal is Alexis Sanchez going to Manchester United. For United, it’s hard to ever imagine adding a player of Sanchez’s talents as a bad thing. But that doesn’t mean it doesn’t come without question marks.

United’s squad is certainly not perfect, but does Alexis Sanchez actually fill any of their holes? At Arsenal, Sanchez was used primarily as a wide forward, the one position United actually have in abundance. Sanchez would be best deployed as a second striker, but Jose Mourinho rarely deploys two strikers.

Then there’s the other issue. How will Sanchez fit in, not only in the dressing room but within the team? We already know Sanchez can be moody and when he’s in a bad mood, he can be a massive detriment.

Sanchez is joining a United team that not only have a great on-field dynamic, but love each other off the field as well. They love hanging out and love when teammates each have success. It’s not a coincidence that in their first game back from a rejuvenation/team bonding trip to Dubai, every player was suddenly more confident on the ball.

Sanchez is an incredibly talented player when he wants to be, but these are questions that are certainly worth asking. At 29 years old, United aren’t going to be able to sell him and he will likely be spending the next four years at Old Trafford. If he’s not happy, that could be a very long four years.

It’s rare that you see a straight swap deal in European soccer and this is pretty much why. Both players in this deal will come out as winners. They’ll be leaving bad situations and coming into better ones. Both clubs may come out as winners to, but there’s certainly a chance this deal ends up looking bad for both clubs.