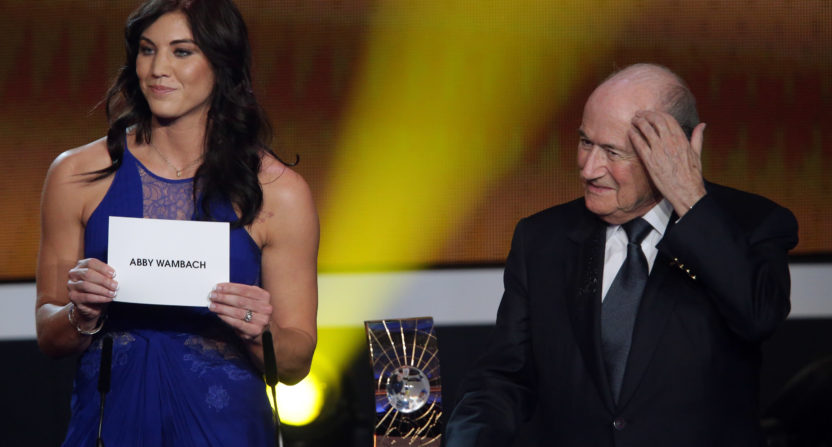 Former USWNT goalkeeper Hope Solo is the latest in a long line of women to have come out and admitted they were sexually assaulted in their lives. And like many of those women before her, Solo’s accusations target a powerful man in her industry.

The 2015 Women’s World Cup champion said that before she went on stage with Sepp Blatter at the Ballon d’Or ceremony in January of 2013, Blatter grabbed her ass.

The Guardian’s story about the accusation has more.

In an interview with the Portuguese newspaper Expresso, being published on Saturday, Solo, 36, claimed she “had Sepp Blatter grab my ass” at the glittering presentation of Fifa’s annual football awards for achievement during 2012. Solo presented the Fifa women’s world player of the year award on stage alongside Blatter, to her colleague on the USA team that had won the gold medal at the London Olympics, the striker Abby Wambach.

Expanding on the alleged incident on Friday, Solo told the Guardian that she had to compose herself immediately afterwards to concentrate on making her speech and giving the presentation to Wambach. “I was in shock and completely thrown off,” Solo said. “I had to quickly pull myself together to present my team-mate with the biggest award of her career and celebrate with her in that moment, so I completely shifted my focus to Abby.”

The interview with Solo was conducted by Expresso, a Portguese newspaper.

She also discussed the culture of sexual harassment in sports.

It’s rampant, it’s not just in Hollywood, it’s probably all over the place. I’ve seen it in sports. For years, in the past, female players date and end up marrying their college coaches, which obviously a coach should not be doing, especially with a young player. I’ve seen it not just with coaches, I’ve seen it with trainers, doctors, and our press officers… I’ve seen it amongst players in the locker room. I don’t know why more players don’t speak out against it.

Blatter denied the claim by Solo, calling it “ridiculous”.

The former FIFA boss is no stranger towards sexist comments, however, as (briefly) recapped by The Guardian.

Over his years he faced criticism for a series of sexist remarks, including a suggestion in 2004 that female players could wear “tighter shorts” like “they do in volleyball” to make the game more appealing to a male audience. In 2013, he called a female candidate for Fifa’s executive committee “good, and good looking”. Days later, when congratulating the new female members of the executive committee, he said: “Are there ladies in the room? Say something! You are always speaking at home, now you can speak here.”

This isn’t going to end any time soon.