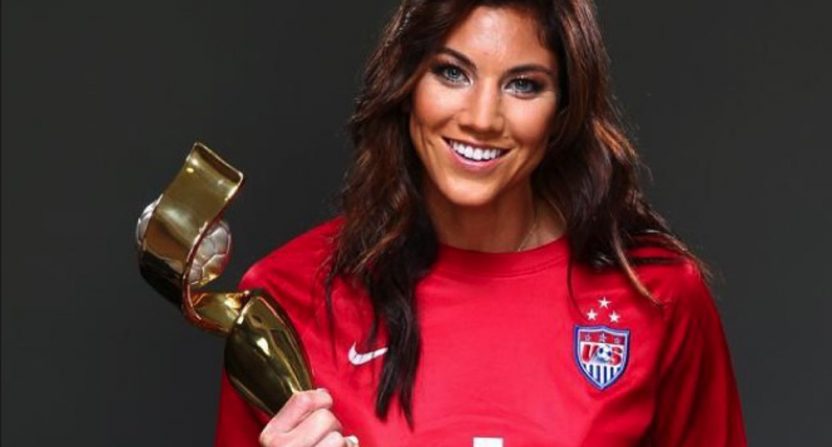 Former U.S. women’s national soccer team goalkeeper Hope Solo is making a big move into the television realm. Solo has signed a production and development deal with INvelop Entertainment for unscripted original content. Here’s some more on what exactly we’ll see in this deal from INvelop’s release:

Under the new deal, Hope and her manager Tiffany Shine will serve as Executive Producers together with INvelop Entertainment. The first project under the partnership will be a new season of the sports medical series, “The Cutting Edge,” with Solo attached to host.

The series follows athletes through a fascinating journey examining the risks of common sports injuries, the treatment and rehabilitation methods, and the most current research available. Solo was featured in the first season which aired on FOX Sports 1.

“I am very excited for the opportunity to work with Brant and INvelop Entertainment,” said Solo. “He is an industry leader that shares my passion for unique story-telling and together we look forward to delivering content that will resonate with not just sports fans but all viewers.”

The new season of The Cutting Edge doesn’t have a broadcast partner announced yet, but it seems likely it will land somewhere. Going ahead and producing it suggests there’s already interest in this, and having Solo attached as the host may help. It’s also interesting to see Solo signing an overall production and development deal, as that certainly suggests that INvelop sees a lot of potential in her, on camera and off.

How does this fit into Solo’s overall soccer career? Well, that’s a good question. At 35, she’s probably not quite done yet, but after the U.S. national team suspended her for six months in August following her comments after a loss to Sweden in the Olympics, the amount of money she’s making has definitely dropped off. There’s still a lot of discussion about her recovery from shoulder surgery and if and where she’ll choose to play again, whether that’s in the NSWL, in Europe, or internationally. In any case, dabbling in a media role certainly seems to make some sense for Solo at the moment. It will be interesting to see how this works out in the long run.