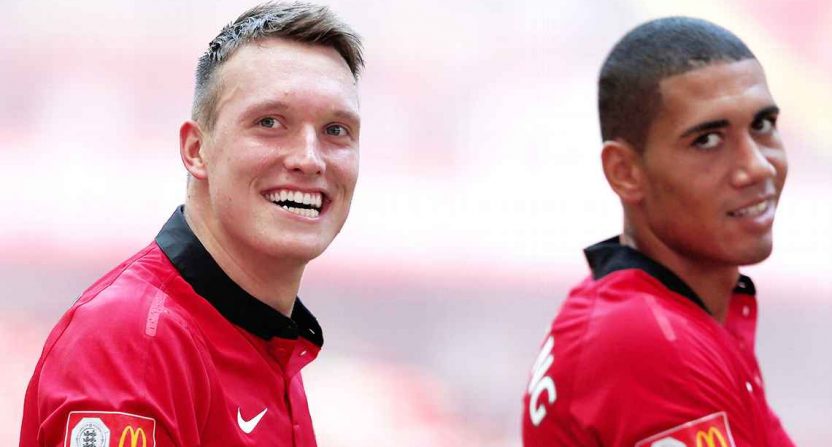 From the moment Manchester United met up for preseason camp this year, manager Jose Mourinho has made no secret of his desire for the club to sign another center back. The transfer window would come and go with United not signing any central defenders, and with the team conceding seven goals in their first two games, he may have been right.

There is of course a level of irony here. Mourinho’s first signing with United was center back Eric Bailly. Last year, he asked for Swedish international Victor Lindelof and the board obliged. Neither player has seemed to get any better under Mourinho.

But in Monday night’s 3-0 home loss to Tottenham, Mourinho opted for a different pair at the back. Chris Smalling and Phil Jones, two of United’s most senior players got the call, and the results were disastrous.

Chris Smalling was signed by Sir Alex Ferguson and joined Manchester United prior to the 2010/11 season. A year later, the club added Phil Jones from Blackburn. Both players were signed not for what they were, but for what they had the potential to become.

The plan was simple, for a few years the two would learn from United’s great central pairing of Rio Ferdinand and Nemanja Vidic, and when those two were too old, they would become the team’s new central pairing. They also gave the team some depth up the middle as the teams defenders tended to be very injury prone.

Everything started out really well. Smalling was used primarily as a center or right back, while Ferguson liked to deploy Jones at right back or even as a defensive midfielder. They both had their rookie moments, as was expected, but playing alongside Ferdinand or Vidic was really helping them develop their game.

Eventually Ferguson retired, Vidic and Ferdinand left the club and it was time for Jones and Smalling to take their place in the center of United’s defense. There was just one problem, they never quite became those top defenders everyone expected them to become.

That’s not to say Smalling and Jones are bad. They aren’t. They’re both perfectly fine defenders but they also both have their bad tendencies. Smalling tends to have one or two moments every match where he just switches off, and if that happens at the wrong time, it can cost you the match. Jones can be great at times, but  tends to end up wildly out of position far too often.

For a team as big as Manchester United considers themselves to be, it’s totally fair to wonder how Smalling and Jones are still firmly etched as part of the senior squad. The truth is, it’s partially because they earned it and partially because, well because there wasn’t really anyone else.

Smalling and Jones have had eerily similar careers, with the latter being just a little bit more hampered by injuries than the former. They both got off to hot starts, likely thanks to playing with Ferdinand and/or Vidic. Sir Alex Ferguson, ever the one to play mind games, said the duo could go on to be England’s center back pairing for years to come.

It’s important to remember how big a statement that was. In 2011, when Sir Alex Ferguson said something about a player, people listened. Most importantly the media listened, and we all know the media are never shy about singing the praises of new young England player.

One of the people that listened was England manager Fabio Capello, who handed them each their England debut in late 2011. Since then, they’ve been in and out of the England squad, with Smalling winning 31 caps to Jones’ 27. Neither of them have ever won more than seven caps in a given year.

Nevertheless at least one of them has always kind of been, there. Smalling was a member of England’s 2014 World Cup squad and started at Euro 2016. Jones went to Euro 2012 and the 2018 World Cup. Again, if you’re asking how, it’s not a completely unfair question.

When the two players made their international debut, it’d be very harsh to say they didn’t deserve it. But there were two other factors at play. Like with United, there simply hasn’t been anyone else. Over the past seven years, England have had an old John Terry, an old Rio Ferdinand, the immobile Gary Cahill (who just retired from international play), Phil Jagielka, and uhhh, occasionally Mathew Upson? See my point?

The last thing they had working against them is injury, though oddly not to other players, but to them. Phil Jones has been injury prone his whole career. Every time he seems to be getting a good run of form going he gets hurt. In seven year,s we’ve almost never seen Jones stay healthy for a full season. What that’s done is create the narrative, that once he’s fit, he’ll put it all together. He never has, so he’s also never been fit.

It’s important not to forget how big a role the media plays in all this. When assessing the squad every year, United looked at Smalling and Jones and saw two England internationals. They were players that the media believed in and kept saying they just needed a good run of games together. If that’s what the country believed, why would you think you needed to get new defenders? Hell, even Mourinho has given Smalling the captain’s armband on numerous occasions.

At this point, it would do both players well to leave Old Trafford. It’s not because they aren’t good enough to play there, they are. Unfortunately at this point, the fans and media have turned on them so much that they’ll never get the support they need to really find the consistency in their game. You’re not going to win a title with them as your main pairing (though they have proven they can contribute to a title winning team), but you could do plenty worse with your center back pairing.