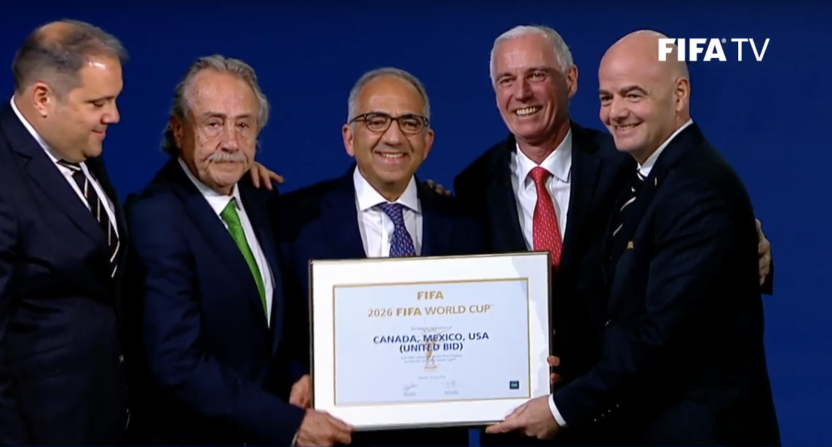 In what was expected to be a tight vote, it was decided in a landslide that the United bid of Canada, Mexico and the United States will be hosting the 2026 FIFA World Cup over Morocco.

North America won with 134 votes compared to Morocco’s 65. A single vote was placed on neither which if that had won majority, would have re-opened bidding without the two bids and open up Europe and Asia to host.

The 2026 version sought lots of changes in the bids, the format and the voting procedure. Joint bids came back for this version as this will be the first joint bid to host since the Japan/South Korea 2002 World Cup. The 2026 tournament will go from 32 to 48 teams, therefore raising the number of games from 64 to 80. And with 16 groups of three teams each, it’s going to require a lot more resources than previous World Cups. Last, but not least, the voting procedure was different. In order to limit potential corruption like what happened with previous votes, every country eligible to vote got a vote rather than the old FIFA Executive Committee, now FIFA Congress. And in the midst of transparency, FIFA revealed who each country voted for.

Some notable votes include Iran voting for neither and Cuba, Slovenia and Spain abstaining along with the bid countries and U.S. territories Guam, Puerto Rico and U.S. Virgin Islands not voting for conflict of interest reasons. Spain had no representation because officials were dealing with the emergency sacking of manager Julen Lopetegui after he took the Real Madrid job but was planning on waiting until after the World Cup to move over.

The rumors of bloc voting were largely unfounded. CONMEBOL announced they were backing North America but Brazil voted Morocco. Morocco’s support was largely out of Africa along with some European and Asian countries. Belgium, China, France, Italy, Netherlands and Qatar were notable Morocco supporters. And despite rumors that the United bid had President Donald Trump talk to North Korean ruler Kim Jong Un about voting for the North America bid during their nuclear summit, North Korea voted for Morocco.

Before the vote, the bids made their final presentations focusing on their strengths. For North America, they focused on the fact that the stadiums have already been built, the infrastructure to support a 48-team World Cup is already there and that they can promise $11 billion in profit to FIFA. Morocco focused on the closeness of all stadiums which would limit travel for teams and fans, better game times for European audiences and a lighter carbon footprint. Morocco also subtlety mentioned within their presentation that guns were banned in their country which is a big source of debate in the United States.

In inspection, North America bid had higher marks than Morocco on all but one area and Morocco could never really promise anywhere close to the profits North America promised ($5 billion to $11 billion). Are those numbers inflated? Probably, due to likely higher operating costs than expected. But they’re probably equally inflated.